Home » Expert: Tragedy In The Air Not Caused From Breast Feeding 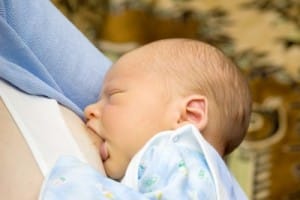 This week started off on a somber note when it was reported that a mother accidentally smothered her four-week-old child aboard a United Airlines flight from Washington to Kuwait 35,000 feet above ground on November 24th.

The Egyptian woman from Washington was flying with her 4-week-old daughter to Kuwait to see relatives and show off the new baby. She had fallen asleep on the plane and woke up screaming when she realized that her baby was lifeless and not breathing beside her.


While it was originally reported that the baby was breast feeding at the time of her death, experts have quickly come out to refute that claim.

“This has nothing to do with breastfeeding,” Heather Kay, a lactation consultant in Princeton, N.J., told ABCNews.com. “If she had been holding the child and she fell asleep, she could have smothered it as well. [And] making it sound like [breastfeeding] is the reason the baby died is really uncomfortable.”

It is the falling asleep with a baby in your arms that is dangerous, not the breastfeeding itself.

There was a doctor on board the flight who tried to revive the little girl, but to no avail. While the flight was diverted to London’s Heathrow Airport in efforts to save the baby, she was pronounced dead on arrival at 10:35am.

Police are still awaiting results from the autopsy that was performed three days after the death. So far the death is being treated as “unexplained” and no arrests have been made in the tragic accident.

Dr. Ruth Lawrence, past president and founder of the Academy of Breastfeeding Medicine, asserted to ABCNews.com that there must have other factors at play in the plane death because “under normal circumstances, babies do not get smothered [while breastfeeding].

“Breastfeeding doesn’t smother babies,” she told ABCNews.com. “I don’t know a mother who hasn’t fallen asleep while feeding her child, whether nursing or bottle-feeding.”

This is just such a tragic incident that took place. I cannot even imagine the pain and guilt that the mom must be feeling. Experts have been warning moms for years how dangerous it is to hold a baby while sleeping, or even co-sleeping because of the risk of smothering the child by rolling over.

Things happen so quickly and I don’t think that anyone ever thinks that it will happen to them. My heart goes out to this family. – Alison, staff writer