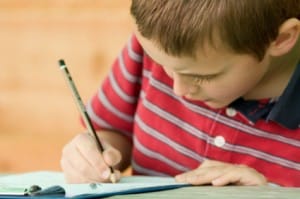 Children diagnosed with ADHD, attention-deficit hyperactivity disorder, often experience difficulties when trying to pay attention in class. According to researchers, this inattentiveness may create learning barriers. Teachers have used math and reading problems as red-flag indicators in the past but researchers now state that even grammar, spelling and writing issues may be present in children with ADHD.

“Written-language disorder is kind of overlooked,” study author Dr. Slavica Katusic from the Rochester, Minnesota Mayo Clinic said about the findings. “A critical skill for academic success, social and behavioral well-being,” grammar, spelling and writing skills are continuously built upon each school year. When fundamentals and building blocks are missed, it is only a matter of time until the child experiences extreme difficulties and falls far behind their peers.

Nearly 6,000 children were included in the study. A little more than 800 of them scored poorly in writing tests. Of all of the kids in the study, 379 fit the criteria for ADHD. One in six boys without ADHD scored low in writing while nearly two-thirds of boys with ADHD had trouble in writing.

For girls, less than 10 percent without ADHD had trouble with writing compared to the approximate 57 percent with ADHD scoring low in writing skills. Girls with ADHD were also nearly ten times more likely to have writing and reading disorder combinations than girls without ADHD. With results like these, it could only be a matter of time before schools start seeing problems of astronomical proportions.

Previous studies have indicated that nearly 1 out of 10 children are now diagnosed with ADHD. This means that, in the average classroom of thirty students, about three students will be diagnosed with ADHD. Based on recent statistics and the findings in both the current and previous studies about academic performance in children with ADHD, it makes you wonder why testing children with ADHD for all learning disabilities isn’t mandatory in public schools.

Catching learning disabilities early help prevent falling behind in academics. Individualized Education Plans and treatment options are available. Honestly, there really is no reason that any child should suffer in a public school setting – not when the impact of ADHD in learning has been presented – not when evidence supports the benefits of early intervention.