Despite the multiple warnings and scare tactics used in public messages, bed-sharing rates haven’t seen the decline that experts are hoping for. According to a new University of Georgia study, the issue may be how the message is being delivered, rather than the message itself. 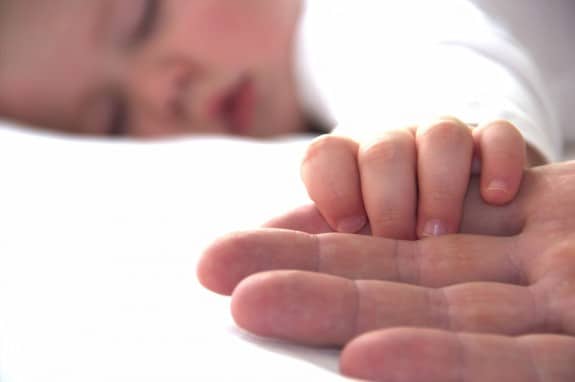 Trina Salm Ward, assistant professor in the UGA School of Social Work and assistant professor of health promotion and behavior in the College of Public Health, reviewed literature on bed sharing and published the study “Reasons for Mother-Infant Bed Sharing: A Systemic Narrative” in the Maternal and Child Health Journal.

In this study, Salm Ward looked at the main reasons behind bed-sharing, most of which included breastfeeding, emotional comfort and reassurance, monitoring, better sleep for infant, family traditions, and bonding. And it’s because of these reasons that Salm Ward believes the issue may be more complex than originally thought.

“The American Academy of Pediatrics recommends that mother simply not bed-share with their infant,” Salm Ward told Science Daily. “However, we’ve found that the ‘Just don’t do it’ messaging isn’t helpful and that scare tactics don’t necessarily work. Instead, we need to look into harm-reduction techniques.”

But Salm Ward says that we need to stop alienating mothers who continue to bed-share. Instead, we need to try and look at the reasons that they may be choosing to bed-share and offer them tailored information that will help them make better choices. For example, in a case where mothers may be bed-sharing for socio-economic reasons, such as not being able to afford a crib, we need to explain why bed sharing isn’t recommended, but we also need to give some viable suggestions that may help them in keeping their children safer during sleeping times.

“Infants should be sleeping in the supine position, on their backs. They should never be face down since they can’t lift their heads. They should also be on a firm surface without any pillows and blankets,” Salm Ward said.

But if mothers are still set on bed-sharing, then they should be given safety tips that may help reduce the risk. For example, explaining that, if bed-sharig, no other family members should be sleeping next to the infant. And tobacco use, drug use of the mother, and alcohol use can increase risk, as can sleeping on sofas, armchairs and with soft bedding.

“Mothers can first go to their healthcare providers and learn about the dangers of bed-sharing,” Salm Ward said. “First responders and public health officials can also provide support by doing safe-sleep campaigns, radio ads or lectures, depending on the community’s needs. The goal is to offer personalized options to mothers who may not be ready to stop bed-sharing.”

Salm Ward also believes it may be helpful if the American Academy of Pediatrics could help clarify a few things in their message regarding co-sleeping versus bed-sharing because, while one is recommended, the other is not. For example, Co-sleeping options, like cots that sit against the parent’s bed, as well as in room cribs and bassinets are viable options for co-sleeping based on the AAP recommendations. Sleeping in the same bed is not considered one.

“Co-sleeping and bed-sharing are used interchangeably although they aren’t the same,” Salm Ward said. “Co-sleeping means sleeping in the same room as your infant in close proximity. Bed sharing is when you actually sleep on the same surface as your baby. Co-sleeping is the preferred option over bed-sharing.”

Salm Ward intends to further investigate her findings by reviewing bed-sharing data in Georgia and will then make recommendations based on those findings.