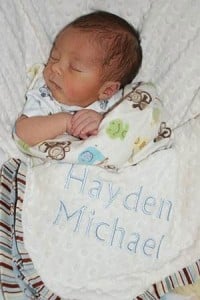 Dari Nowkhah, former News On 6 reporter in Tulsa, Oklahoma and his wife Jenn have turned one of the most tragic events a parent can be faced with into something beautiful. So beautiful that it actually brought me to tears.

Dari and Jenn became parents to little Hayden Michael on August 12, 2011. He was born a perfectly healthy baby boy but six days after his arrival, Hayden was struck with a virus. This virus attacked his heart.

The story could have ended there, but it didn’t. Dari and Jenn wanted to let Hayden’s life and unfortunate death shine some light on the need for infant transplants. They started Hayden’s Hope, named after their son, to raise awareness for infant transplants and to help raise money and offer support to families with infants and children that need an organ donation.

“Hayden’s Hope, we hope, helps others and that’s another way to carry Hayden’s legacy. We’ll never forget Hayden and our hope is that everybody who ever met him or didn’t but know his story get to realize what a great baby he was. Those 39 days, we wanted more but we feel lucky that we had that many,” Dari stated.

Currently, donors for infants are very difficult to come by because parents that lose an infant cannot donate the infant’s organs. Organs for infant come from children and adults. Because the donor list for adults is so large, the chances of an infant receiving a donor are very slim. There has been some talk recently, however, about allowing parents who lose their infant to donate the organs, if they so choose.