Brandi Bouchillon cradled her baby girl lovingly on Thursday as she recalled the events of the last few days. Just two weeks ago she, and husband Andy welcomed their first child, and only a couple days ago they were all almost killed when a tornado barreled through their town.

While many residents were in their homes when the EF3 tornado hit the town of Van, Texas, the Bouchillon family was inside their SUV. Caught in the storm the vehicle was lifted off the ground and ended up wedged in a clump of trees. 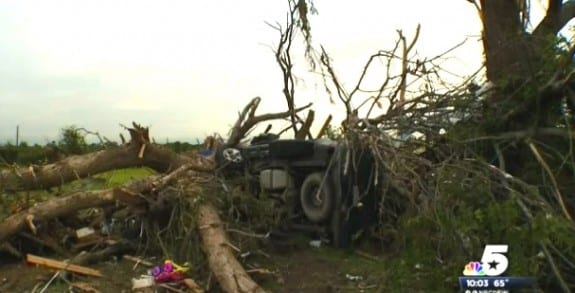 “We started turning. The car started flipping and I was just praying. I don’t remember nothing after that. Turned the car seat sideways… was holding it… laid over the top of it and that was it,” Brandi Bouchillon said.

“I crawled. I don’t know how I got out,” her husband Andy said.

From images of the vehicle crumpled between debris and trees it’s hard to imagine how anyone could have survived in it.

Bailey’s car seat was all but destroyed during the crash.

“I had to go in and find her. Finally, when I touched her, she cried and I was like, ‘Thank you Jesus,'” Andy told NBC News. 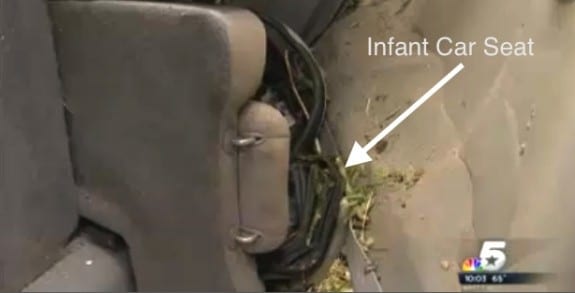 Left with no home or vehicle, the family has been given a temporary place to stay and a new vehicle from Andy’s boss at an auto shop.

Despite the fact that they will have to start fresh, they’re just thankful beyond words that they and their 2-week-old daughter, Bailey Grace, are alive.

There is, however, a silver lining to their story.

When they returned to the scene Tuesday to find their missing dog Tater, they found him still guarding the SUV.

“Tater. I have all girls, this is my son. He loves to go riding and loves when I go fishing … When we got in that wreck and it flipped our car over, we couldn’t find him. Today’s the first day to get back out here and look for him and here he is,” Andy said moments after finding his dog.  “He’s just a good boy … He’s a part of the family. I don’t really know what else to say, I’m just glad my dog’s back.” 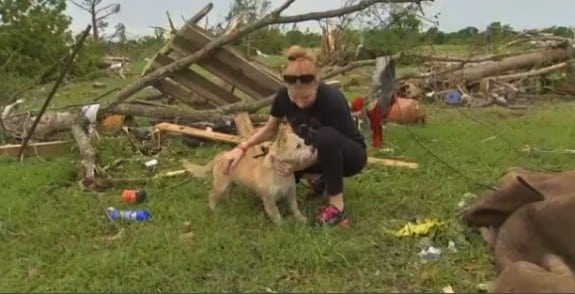