Animals have aided the blind for quite some time now. More recently, they have been trained to help calm children with autism and detect health conditions like cancer and diabetic episodes. However, there’s little evidence to indicate that dogs can actually detect epileptic seizures. But you couldn’t tell an Irish family that. They say that Charlie, their Great Dane, can detect their daughter’s epileptic fits before they happen.

Three-year-old Brianna Scanlan, whose episodes were detected at just three months of age, has had epilepsy since birth. Her seizures can range anywhere from a trance-like state where she simply stares off into space to full-on violent convulsions that put her at risk for bodily harm.

But with Charlie around, the family feels just a little safer. 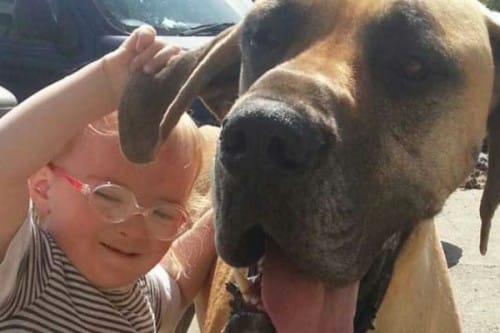 According to Arabella, Charlie is not a trained “seizure alert dog.” In fact, he’s just a normal family pet. But some time ago, the family started to notice that Charlie would become agitated and walk in circles around Brianna, just minutes before a seizure would happen.

“Charlie would know about 15 to 20 minutes before she’s going into a seizure,” Arabella said. “He’ll get ever so panicky and giddy, almost as if you’d think ‘this stupid dog is going to knock her over.’”

In fact, the family initially thought they would have to re-home Charlie because of his agitation. He is, after all, a Great Dane.

“He’s a big boy – it isn’t like he’s agile. When Charlie turns the whole room turns with him,” Arabella said.

But as the family watched Charlie, they started to notice a pattern in his behavior. His agitation seemed to proceed Brianna’s epileptic fits.

“We kept an eye on this and, sure enough, I went into the yard one day and she (Brianna) was buckled over to the side, on top of him (Charlie). She was actually having a seizure,” Arabella said. “She was leaning against the wall, bent over him and he just looked at me as if to say ‘I don’t know what to do.’ But he stayed with her, he didn’t move.”

Since then, the family says that Charlie rarely ever leaves Brianna’s side. If she goes into a seizure, he’ll gently pin her against the wall or another surface to keep her from falling over. He’ll then guard her and watch over her until help arrives. And, according to Arabella, he hasn’t once knocked her over.

“I actually don’t know the psychology behind it but, no shadow of a doubt, people are mesmerized when they see him in action. It would actually melt you hear to see them together.”

Unfortunately, there isn’t much in the way of science to back up this family’s amazing story. Though dogs have been found to “sense” a number of health issues – dysregulation in individuals with autism, blood sugar spikes and drops in diabetic patients, cancers and more – there’s only been a few studies done on dogs and epilepsy.

One preliminary study, published in Seizure, European Journal of Epilepsy, suggested that “some dogs have innate ability to alert and/or respond to seizures.” It added that the success of this ability was found to rely heavily “on the handler’s awareness and response to the dog’s alerting behavior.”

Yet, the lack of scientific information regarding a dog’s ability to sense seizures doesn’t stop the Sheffield-based charity, Support Dogs, from training “seizure alert dogs.” According to the training facility, their trained dogs are able to detect seizures anywhere from 10 to 55 minutes before it occurs.

Dr. Claire Guest, a Medical Detection Dogs chief executive, says that she’s seen other trained dogs in action. In fact, she even had a cancer dog “warn her” during training, and that dog ended up being right; a little while later, she was diagnosed with first stage breast cancer. But Guest says she’s never really seen a dog predict an epileptic fit. However, she did state that it’s not impossible.

Dogs that are highly expressive and attentive to humans tend to show a general concern and desire to protect their owners from harm, and it could be that some dogs could predict seizures through smell, but it’s also likely that they’re picking up on visual signs, she said.