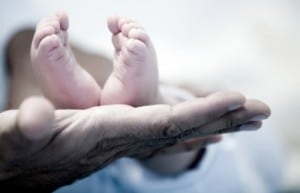 Ryan Jones and his fiancée Elin Davies-Russell welcomed the best Christmas gift of all– a little girl.

Ryan and Elin had just visited the maternity ward earlier that day because they were signs that the baby was on its way.  But Ryan said that they were told to go home and relax because the facility didn’t believe that Elin was going to deliver anytime soon. Apparently, they were wrong.

“We’d only been back ten minutes when Elin said the baby was on its way,” said Ryan, a 24-year-old Police Community Support Officer, who was used to dealing with emergency situations.

Right away, he dialed the emergency dispatcher, but he knew they wouldn’t make it in time. He could already see the baby’s head. So Ryan grabbed a towel and followed the emergency operator’s instructions. And right there, under the Christmas tree, they welcomed their daughter, 8lb, 8oz Khloe Seren (Welsh for star) to the family.

“When Khloe is older, she will be able to boast that she was born under a Christmas tree – not many people can say that,” she said. “And she was delivered by her own dad – he kept very calm and did a great job.”

“I just did what I was told,” said Ryan. “Thankfully, it all went well…It was amazing especially because it all happened under the Christmas tree.”

Their two-year-old daughter, Robyn, had to wait for her chance to welcome the new baby because she wasn’t home at the time.

“When she came in 20 minutes after the birth, she said, ‘Hello daddy, hello mummy, hello baby!’” Ryan said.

After paramedics arrived at the scene they and some midwives gave mother and baby a look-over. Elin and baby were told they could stay home instead of running off to the hospital, so it looks as though the whole family will enjoy a wonderful Christmas together.