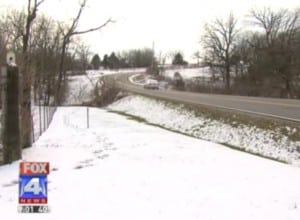 A Missouri dad has a lot to be thankful for today after he and his young son survived being submerged in a creek following an accident that took their vehicle off the road.

On Monday morning at around 8.00 am when William Whenham was driving his truck, the highway was already covered with slush and snow. Colton, his six month old son, was strapped into his car seat in the back. Suddenly, William lost control and the truck traveled down and overturned into a creek.

Says Sgt. Collin Stosberg of the Missouri State Highway Patrol“”The truck traveled down an embankment, overturned and came to rest into a creek,”

William immediately freed himself and went to rescue his infant who was submerged for around a minute. By the time the emergency crew arrived, the father and son were already ashore but suffering from hypothermia.

William also sustained some minor injuries after the accident but is home now.  Colton was taken to the Children’s Mercy hospital in Kansas City where he is still under observation but according to doctors his condition is stable. 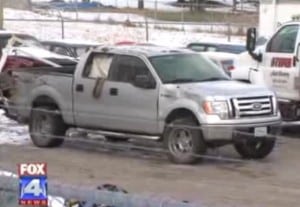 Storsberg says that the incident is again a reminder of the power of seatbelts.

“It could have been tragic consequences had he not been buckled up,” said Stosberg. “The belt likely saved Whenham’s life and allowed him to save the life of his son. I often hear, ‘What if I go into the water?’ But how are you going to survive that initial impact?”

“Crashes happen. The moral of the story is, he was able to unbuckle himself and do what he needed to do and save his infant son,” Stosberg said.