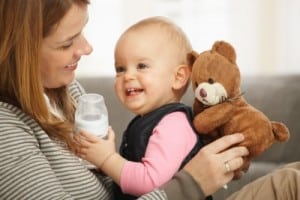 In a move that should have happened many years ago, the FDA has finally banned BPA in baby bottles and sippy cups.  Fortunately most major manufacturers stopped using the toxic plastic in their bottles, teethers, sippy cups and toys 3 years ago after Canada announced that they were considering pulling juvenile products that had BPA in them off of shelves.

Responding to public pressure, companies in both Canada and the United States that created children’s products that would come in contact with food or that a baby may put in their mouth, switched the plastic they used to BPA Free.  Aside from cheap products that are sold at the discount stores, most bottles have been made without BPA for a couple years now.

In 2008, the Natural Resources Defense Council filed a petition asking the FDA to ban BPA outright. After 41 months of inaction, the FDA finally denied the petition, ruled that BPA was still considered to be safe, and refused to prohibit its use.

Today’s announcement came after a petition filed by the American Chemistry Council suggested the government should ban the use of BPA in specific products.

“Although governments around the world continue to support the safety of BPA in food contact materials, confusion about whether BPA is used in baby bottles and sippy cups had become an unnecessary distraction to consumers, legislators and state regulators,” wrote Steven G. Hentges, a spokesman for the ACC in a statement.

The next hurdle is to have BPA banned in all food-related manufacturing. Canned food is one of the biggest offenders and a product that in the cupboard of 90% of families.

“This is only a baby step in the fight to eradicate BPA,” Dr. Sarah Janssen, a senior scientist at the environmental advocacy group Natural Resources Defense Council, told CNN. “To truly protect the public, FDA needs to ban BPA from all food packaging. This half-hearted action-taken only after consumers shifted away from BPA in children’s products – is inadequate. FDA continues to dodge the bigger questions of BPA’s safety.”

But don’t expect the FDA to expand the ban to food related packaging any time soon,

Despite today’s announcement Curtis Allen, an FDA spokesman, reiterated that the FDA continues to stand behind BPA’s safety.

“It’s important to note that we’re not making a statement on the safety of BPA, only on the petition from ACC,” he said. “The agency continues to support the safety of BPA for use in products that hold food.”

They also have a good database of studies that document how destructive BPA is. I’m thankful that the FDA has taken this step to ban the plastic, but I wish they would take it further to protect more lives.