Home » Fergie Takes In The Sights In Rio De Janerio

A pregnant Stacy ‘Fergie’ Ferguson was photographed spending time at Ipanema beach with her entourage in Rio De Janerio.

While dressed in a black bikini, which was covered by a colorful maxi-dress, the singer wet her feet in the ocean and happily posed with many fans. 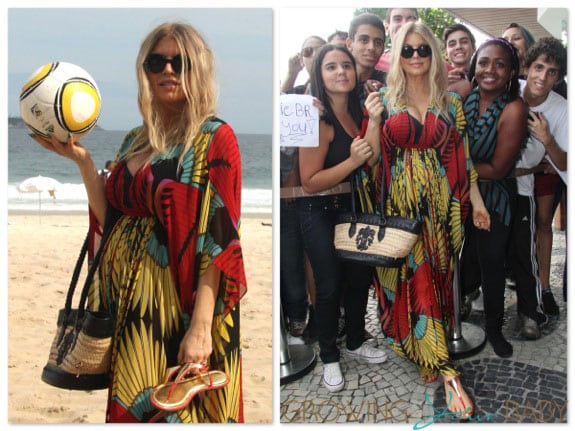 Fergie’s trip to Rio was quick.  Shortly after her time at the beach she was saying good bye.

The singer and her husband Josh Duhamel expect their first child in September. On Wednesday Josh told Chelsea Handler that he plans to be in the delivery room when his wife gives birth to their first child, but he’s only allowed to witness the birth from the waist up.

“I will be there. She says that I can’t be anywhere below right here,” he explained, pointing to his chest. “You know, because some women get nervous about the actual birthing process.”

“Some men don’t recover from that in all fairness,” Handler joked.