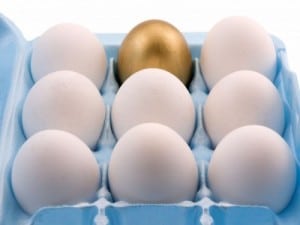 According to the the American Society for Reproductive Medicine, the ethical fee to pay for egg donation is around $5,000. Some fertility companies are paying up to $50,000 for eggs from the right donors.

Since the first baby conceived from egg donation in 1983, the American Society for Reproductive Medicine has established an ethics committee to maintain some limits on this reproductive technology. They have established guidelines on the fees paid to egg donaters, saying $5,000 is the recommended maximum. According to them, paying fees above $10,000 “are not appropriate.”

Despite these guidelines, a survey looking at more than 100 egg donors and over 300 newspaper ads for egg donations found that many are getting far more than this. Nearly half of the people were offered fees over the $5,000 mark and one forth were getting over $10,000 for egg donations.

The study also showed that there was a connection between a college student’s SAT score and the fees for egg donation. Fertility agencies were putting their focus on students that seemed more intelligent. This focus, however, is a violation of the guidelines set out for egg donation. According to the ASRM, no company could focus on a person’s “ethnic or other personal characteristics.” Despite these guidelines in effect, there is little oversight on fertility clinics and rarely any punishment for those who break the guidelines.

Some worry that the high fees paid to egg donations, far higher than for sperm donations, could be exploiting women. Objectors worry that women might ignore the risks involved with egg donation because of the money they can make from it. Egg donation is a medically invasive and time-consuming procedure that does pose a health risk to women.

However, not everyone is concerned by the high fees and the selecting focus. John A. Robertson, law professor of the University of Texas, feels the high fees and characteristic focusing is acceptable. He argues that there is nothing inherently wrong with allowing couples to pay top dollar through fertility clinics for the exact eggs they want. After all, we allow individuals to choose their mates and sperm donors on the basis of such characteristics. Why not choose egg donors similarly,” Robertson asks. – Summer, staff writer