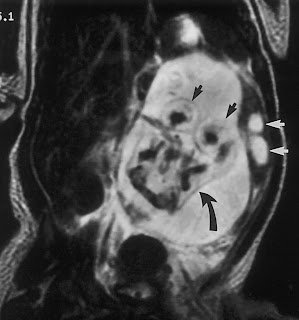 Doctors in Saudi Arabia were surprised to find a year-old girl that has turned out to be pregnant. They say that it is the first incident in the history of modern medicine and are now discussing whether the removal of the fetus from the baby girl is going to be considered a murder.

The mother of the pregnant baby originally had two embryos during her pregnancy. One of the embryos began to develop in the uterus of the other child. In spite of the fact that doctors describe the incident as unique, there can be other similar examples found in history (listed below).

The anomalous phenomenon is known as fetus in fetu. Such incidents are extremely rare: an embryo inside an embryo may appear once in 500,000 pregnancies. The phenomenon always occurs at an early stage of pregnancy. As a rule, the fetuses die in mother’s womb.

It may also happen that a child with a fetus inside survives the entire pregnancy. In this case the embryo continues to live inside its owner’s body like a trapped parasite. A fetus in fetu can be considered alive, but only in the sense that its component tissues have not yet died or been eliminated. Thus, the life of a fetus in fetu is inherently limited to that of an invasive tumor. In principle, its cells must have some degree of normal metabolic activity to have remained viable. However, without the gestational conditions attainable (so far) only in utero with the amnion and placenta, a fetus in fetu can develop into, at best, an especially well-differentiated teratoma; or, at worst, a high-grade metastatic teratocarcinoma. In terms of physical maturation, its organs have a working blood supply from the host, but all cases of fetus in fetu present critical defects, such as no functional brain, heart, lungs, gastrointestinal tract, or urinary tract.

Other instances of this in the media include: