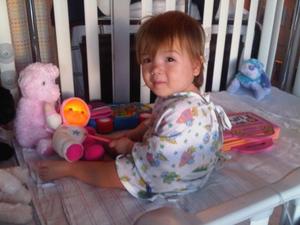 McKinley Rose Nicholas is a fifteen month old baby girl who needs a bone marrow transplant in order for her to survive acute myeloid leukemia (AML), an aggressive form of leukemia common in adults but rare in children.

Her parents first noticed that something was wrong with McKinley when a mysterious growth appeared on her face.

“One Saturday morning, I was holding her in my lap and saw a big lump that had appeared on her face, from her temple down to her jaw,” the toddler’s mom Erica Nicholas recalls.  “It pulled down her eye and went into her mouth. Thank God for that tumor. At least we found out early about the leukemia”.

Upon first inspection Doctor’s told the Nicholas family that the lump was an infection and prescribed her antibiotics to hopes of it clearing up within the next ten days.

Erica Nicholas commented, “Even until the last minute, I thought it was going to be nothing. Then she started chewing her food and spitting it out. My husband was awesome in getting her into the hospital on the same day”.

Shortly after McKinley was diagnosed with (AML) and was immediately placed on an eight day regiment of aggressive chemotherapy. She then spent the next five weeks in the hospital as Doctors closely monitored the effects of the chemotherapy hoping to see some indication that she was improving. Doctors and the Nicholas family were disappointed to discover that after the first round of treatment her cancer showed no signs of remission.

“They told us she is going to need a morrow donor, but none of her relatives are a match for her. If she’s not in remission after the second round of chemo, she will need a marrow transplant from a donor who is not related to her”.

McKinley continues to receive treatment as she waits for a donor. She has already received three blood transfusions and three platelet transfusions. She was able to go home for a five week break after receiving her second treatment of chemotherapy and has since returned to the the Yawkey Center at Mass General Hospital in Boston for another round of chemotherapy treatment and five weeks of recovery time.

Erin Carroll, Erica’s cousin an emergency room nurse at Beverly Hospital commented “She’s an amazing little girl. She was playing on the swings right after having chemo in her spine and a bone marrow biopsy. She is just happy and playful and feisty. The reality is she’s nowhere near close to being cured. She’s facing a long treatment – at least eight months. Almost her whole second year of life is going to be spent in the hospital”.

A Facebook page has been created that will keep you up-to-date on McKinley and her Family.