For Rocklin Fire Battalion Chief Shawn Watkins it will be a midnight snack break that will be hard to forget. The firefighter was up last Tuesday night to grab a quick bite when he heard the cries of a baby coming from outside the double doors. 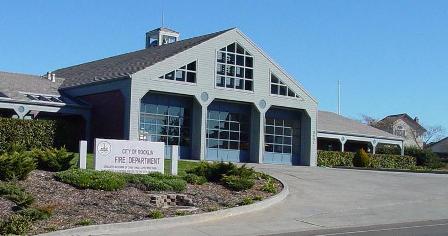 Watkins was in his room at the Station 24 on Crest Drive when around midnight, he thought of having a bowl cereal.  Shortly after he walked to the kitchen he heard a high pitched scream outside the French double doors.

Upon a closer look, he saw a plastic box and a little hand coming out if it.

“I look out the door, I see a plastic box,” Watkins said. “A little hand popped up and (the baby)started crying.”

The baby had been left at the fire station by someone with his umbilical cord still attached. The box was behind a large electric generator and far away from the firefighters living quarters where someone might have heard the cries. If not for the Chief’s hunger pangs, the baby might have gone unnoticed till very late.

The baby was wrapped in two yellow towel sheets and that was the only thing that protected him from the 40 degree temperature. This is the first time a baby has been abandoned at the station according to the officers and he will now be placed for adoption.

If the parents are found they might face criminal charges as they could have legally surrendered the child at sites approved by the state’s Safely Surrendered Baby Law.

City spokeswoman Karen Garner said that Rocklin does not have a safe surrender site, but with the incident, the fire station might get a designation.

42-year-old Watkins has been in the department for 15 years, but this incident was a first and something he says that ‘“freaked me out, to be honest.”

“It was completely out of the norm,” he said.

When he heard the cries, he quickly alerted the fire captain and they brought the box with the baby inside. They noticed that the infant had been bathed thoroughly, he had brown hair and sparkling brown eyes.

With the umbilical cord still attached, they immediately clamped it and called for an ambulance.

Watkins, a father of two girls -8 and 10 years old was in a shock for a few moments, before his parental instinct kicked in.

“We swaddled the baby, and it quit crying,” Watkins said. “There was a sigh of relief.”

The newborn was later taken to the Sutter Roseville Medical Center where he was found to be healthy.

But it might not have been such a lucky save if not for the fire chief.

The state’s surrender law, implemented in 2001, allows parents to legally surrender babies within 72 hours of their birth at safe surrender sites. This includes all hospitals and certain fire stations. The local county government may decide on other surrender sites as well.

“The law requires an exchange from one individual to another,” said Michael Weston, a spokesman with the California Department of Social Services. “You don’t have to give any information, but the baby has to be physically handed over.”

Also under the law the parents are given a bracelet they can use to recover the baby within 14 days. They also have the option to give the family’s health history. The law has helped 600 babies to be safely surrendered this way including 49 in Sacramento County, five in Yolo County, five in El Dorado County and one in Placer County.

The system is in place to give parents a safer options if they cannot raise a baby because of financial crisis or other issues.

Capt. Lon Milka of the Rocklin Police Department said authorities don’t know who dropped off the baby. There was no surveillance video, he said.

For Watkins, it is a new way to look at things.

“I don’t particularly graze at night,” he said. “For whatever reason, I went to eat. It was just meant to happen.”