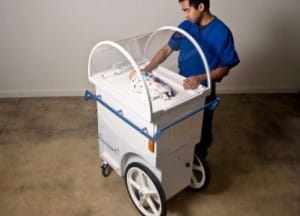 Preterm infants or those with low birth weights are always fighting for survival and need constant controlled environment to keep warm until their body becomes stronger.

About half of the worldwide total, or 1.8 million babies each year, die for lack of a consistent heat until they have the body fat and metabolic rate to stay warm because the proper equipment needed is too costly for developing countries.

Collaborating to save these tiny babies, doctors, industrial designers and rural health care experts have designed an incubator that has been made out of car parts.

The incubator has been developed by NeoNurture that re-purposes discarded car parts to govern incubator systems like heat and air flow.  According to a study conducted by the Engineering World Health group at Duke University, up to 98% of donated medical equipment in developing countries is broken within five years and because of lack of knowledge to repair them, they cannot be used.

The Neonurture incubator, however, uses car parts and therefore can be repaired by anyone, even in developing nations, who has some technical understanding of the car mechanics. The incubator uses sealed-beam headlights as a heating element, dashboard fan for convective heat circulation, signal lights as alarms etc.

Time’s magazine has hailed the effort and shortlisted it as one of the year’s most notable inventions. It is also featured at the Cooper-Hewitt museum’s National Design Triennial, New York. 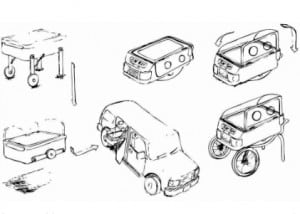 Though the incubator might not go into production its designers hope that it prompts other medical equipment manufacturers to re-evaluate their design approach and make machines that are more suited to be used in rural and impoverished areas.

Timothy Prestero, chief executive of the Cambridge, Mass., design consultancy Design That Matters that aided in the development of the machine says they started the idea with discarded Toyota 4 runner’s parts.

“In the summer of 2007, a few guys just tore one apart,” Mr. Prestero said. “They discarded thousands of pieces until they had things that are plentiful in rural areas: headlight assemblies to provide heat, air-intake filters and such, which could be repurposed without much fuss.”

But as a conscious decision they also avoided standardization.

“As soon as you say, ‘You can only use a 4Runner’s headlight,’ the value goes out the window,” he said.

The makers are now partnering with the Center for Integration of Medicine and Innovative Technology in Boston to give the concept more universal dimension and make its hardware easy to find and use in any part of the world.

“I don’t know where you get a replacement incubator filter in a remote Nepalese village,” Mr. Prestero said, “but you likely can find someone there who can replace a car’s air filter. That’s where this idea really has virtue.”