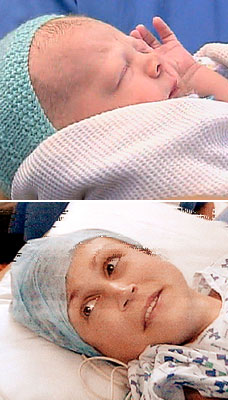 You would have needed a really good satellite to catch it, the first baby was born live on TV last night in the UK.

Birth Night Live has been a controversial show in the UK. Obstetricians have expressed their concern over the disruption it could cause expectant mothers.

Midwives and parents’ charities accused television company Endemol of turning childbirth into a spectacle for ratings.

The Royal College of Midwives considered lodging a formal objection but broadcasting watchdog Ofcom said it would not be able to deal with a complaint until after the programme was transmitted.

One senior staff member at the Nottingham hospital said: ‘Some of us have very big reservations’.

Childbirth isn’t always that simple and things can go wrong.

‘Imagine what it would be like if there was some disastrous complication, live on TV.’

Channel Five chiefs had promised to withdraw cameras if there was any indication a mother or child was in danger.

You will not see me delivering my baby live on TV. There are moments in your life that are just for you and your family. This is one of them.

I respect the fact that this mom was able to stay composed while giving birth live on TV. Congratulations!!