A baby girl was saved while she was still in her mother’s womb thanks to doctors who performed an in utero lung surgery for the first time.

Three months before she was due to be born Alaitz Corominas, from Spain, became the first person in the world to undergo a surgery inside the womb which involved the lungs. Alaitz is 16 months old now and a healthy toddler but if not for the surgeons in Barcelona who fixed her blocked bronchial tubes, the baby would have surely died with just 10 percent chances of survival. 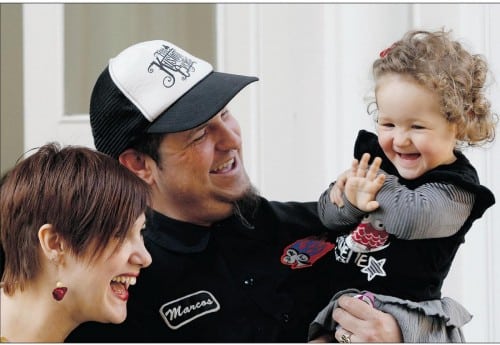 Alaitz means Joy in her parents’ native Basque language. Her mother Monica Corominas was 26 weeks pregnant when doctors found, through a routine ultrasound, that the baby had some lung problems. Because she had very little survival chances, they decided to operate upon her immediately.

The expert team of surgeons in Barcelona performed the procedure on the tiny fetus weighing just 1 lbs 10 oz in less than 30 minutes. They first used an ultrasound to guide an endoscope though the mother’s abdomen and into her womb. The camera ended tube went through fetus’s mouth, windpipe and into the lungs for the operation. A giant TV screen in the operating room then helped the doctors see the enlarged images and confirm that Alaitz was suffering from a condition known as bronchial atresia.

The doctors could not prolong the procedure as there was a risk of her heart filling with liquid during the surgery. It could also trigger her mother into early labor. They therefore hastily reconnected the right-hand-side bronchial tube with the central airways and removed the endoscope.

After Alaitz was born and was 13 days old, doctors performed another operation to remove two of the three pulmonary lobes of her right lung which were damaged by the malformation of her bronchi. Without this, her breathing would have been impossible.

The surgeons from Hospital Clinic and Joan de Deu –  reconnected the bronchial tubes on the right lung to her central airways in a procedure lasting just 30 minutes.

What was critical for the doctors was to perform the operation fast but with extreme caution.

‘In such cases, you have to operate quickly, like a bank robbery,’ said Eduard Gratacos, who led the surgery. He added that ‘the tissues were as thin as cigarette paper’ so they had to be extremely careful.

Post the in utero operation Alaitz’s mom had full term pregnancy and the baby was born in November 2010 weighing 5lb 8oz.

At 18 months, grinning, waving and proudly walking, Alaitz appeared before public for the first time at the Hospital Clinic accompanied with her parents.

‘She is completely normal. She wakes up happy, she laughs if she is pleased, she cries if she is hungry,’ he mother said. ‘It was the only option. We either tried it or put an end to the pregnancy.’

Dr Moreno, a neonatologist at Sant Joan de Déu hospital added that if they would not have operated upon her, the baby would have surely died.

Hospital Clinica is one of the top five centers in the world for fetal surgery but even for them, such a lung surgery was an extreme case.

Prenatal surgeries are similar to operations carried out outside the womb, but are far more complicated as the baby is still attached to the placenta. Even in the US where 600 babies are annually operated upon inside the womb, the risks remain and are very high.

As Alaitz was just 26 weeks, doctors did not think it a good idea to remove her from the womb as she would not have survived even if the lung operation was successful. She was thus given her chance at life inside the womb.

The baby girl thankfully is growing well and like her name Alaitz, adding a lot of joy to her family.