As she got closer to her due date Christine Corbitt’s stomach was undeniable.

“Towards the end of my pregnancy, I was like, ‘Oh my gosh. She’s just so huge,'” the new mom told ActionNewsJax.

3) Carleigh's mom is used to big babies (her first two were 9 and 10 pounds), but Carleigh was a surprise to say the least. pic.twitter.com/hQpq6ji7IJ

As it turns out, her bundle was actually was the largest newborn Dr. Eric Edelenbos has ever delivered.

“When the baby was coming out, I was like, ‘Is this baby ever going to end?’ Everybody in the room kind of just stopped during the delivery and was like, ‘Oh my gosh. Oh my gosh,’” he said.

“I’ve had nine- and 10-pound babies and I figured maybe she’d be 10 pounds. I’d have another 10-pound baby, but she was a surprise,” Christine added.

Tipping the scales at 13 pounds, 5 ounces, Carleigh had to stay in the NICU for a bit while her blood sugar levels were checked. 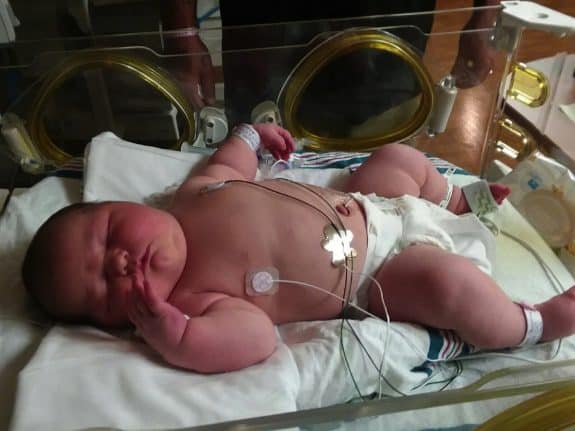 The experience was enough for Christine and now the shop is closed.