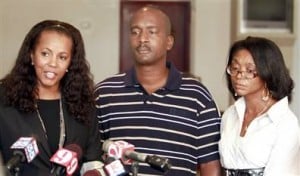 A Florida father, whose 13-year-old daughter suffers from cerebral palsy, has apologized after a video was released of him storming onto a school bus to confront his daughter’s bullies.

This morning James Willie Jones appeared along with his wife and attorney to apologize for his outburst saying that he was sorry for the,“inappropriate use of language and for the way I handled the situation.”

“At that time, I was a bully. And I apologize again for that,” said Jones. “If you see the tape, I feel like I was backed up against the wall as a parent. I just didn’t know where else to go. We definitely don’t want to promote that.”

“Since the school year started, my wife and I noticed that our daughter had become increasingly distraught about school and riding the school bus, but she wouldn’t tell us exactly why.

“When I walked my daughter to the bus that morning, she broke down in tears and finally told me about the bullies who had tormented her on the school bus.  She was afraid.”

In the sheriff’s office report, Jones alleges that several boys bullied his daughter.  They placed an open condom on her head, twisted her ear, smacked her on the back of the head and shouted rude comments at her.

Upon learning about his daughter’s tormentors, Jones was incensed.

“In the heat of the moment, I wanted to confront the individuals who had bullied my daughter and the authority figure who failed to protect her.  I sincerely apologize for my inappropriate use of language and for the way I handled the situation.  As the protector of my daughter I could not stand by and helplessly watch her suffer.”

Video surveillance from the bus shows Jones threatening the accused bullies and the bus driver.  He has posted $2,000 bail and has been ordered to stay away from the driver and all county school buses.

Jones plans to become an advocate for bullied children and raise awareness about what he feels,

“has become an epidemic in our country.”

“Parents need to work with their children to let them know this kind of behaviour is unacceptable and we all need to be aware of what’s happening with our kids.” Jones said.