Home » 15 Foods You Think Are Healthy (But Aren’t)

With the explosion of obesity, heart disease, and diabetes, many people are taking their health more seriously. They are exercising and eating better . . . or are they? See, when the health food craze started, food manufacturers started realizing they were losing profits. To compensate, they tried to meet the demand of health-conscious consumers. Many turned to “fat-free” foods, whole grains, and even gluten-free and vegetarian options. But the jig is up! These pseudo health foods aren’t really good for you. Many contain fillers, have high sugar content, or just aren’t quite what you think they are. To help you avoid some of the biggest deceivers, Growing Your Baby is revealing the top 10 health foods you think are healthy but aren’t. 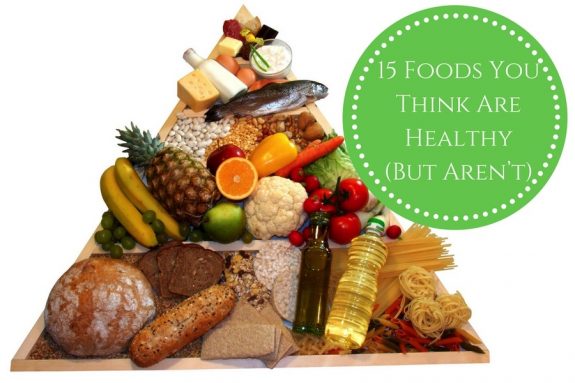 Green tea has long been touted for its antioxidant properties. It has been linked to a lower risk of cancer, osteoporosis, weight loss, and heart disease – just to name a few. Unfortunately, that tea you buy in a container isn’t going to give you the benefits you’re looking for. Packed full of sugar, these pseudo-health foods contain almost no ECG (the antioxidant in green tea). So, if you really want the benefits of green tea, put down the bottle and brew your own.

Banana Chips and Other Dried Fruits

While dried fruits might be an okay snack every once in a while, they are not exactly the health food they pretend to be. The sugar content of fruit goes up when it is dehydrated – drastically so. In fact, you might be better off consuming your favorite candy bar (a bag of M&Ms contains 30 grams of sugar but just two papaya spears contain about 16 grams of sugar – and let’s face it, no one eats just two pieces of dried fruit! Banana chips are, by far, the worst offenders though. Just one ounce contains 150 calories, which is far more than what you’ll get eating a much more filing, medium-sized banana (105 calories).

Don’t let the color of your favorite veggie wrap or pasta fool you! There’s very little vegetable in them. You’ll get more nutrients if you simply added just a small amount of vegetables to your favorite dish. Of course, getting picky eaters to eat veggies isn’t easy. Sometimes you have to sneak them in (which is what makes veggie pastas and tortillas so appealing). If that’s why you’ve been using them, try getting friendly with your food processor instead. Blended veggies can easily be added to most sauces, soups, and casseroles, and blending them rarely alters the taste of your kids’ favorite dish.

Whole grain bread is good for you, so multigrain must be better . . . right? Nope. Breads that are labeled “multigrain,” “9 grain,” and “wheat” can contain refined grains instead of whole ones. Be smarter than the food marketers and check the ingredients list of your favorite bread. If you see the words “bleached” or “enriched,” it’s likely refined. Search for breads that explicitly list “whole grain” instead.

Ah, granola. Tasty, crunchy, and . . . chocked full of sugar! Sure, it might contain oats, nuts, and other goodies, but your favorite granola cereal, munchie bag, or bar probably contains more fat and sugar than you realized. That doesn’t mean you have to give it up entirely though. If you make it at home, you can control what goes in it. For example, you could swap out some of the oil and sugar for peanut butter. The fat calories in it are far better for you. Skip the dried fruits and shave just a little bit of dark cocoa into your cooled granola (doing it before the cooling will cause it to melt). Thanks to its antioxidant properties, it’s actually better for you than some of the other sweet add-ins.

Speaking of peanut butter . . . if you’re buying the fat-free kind because you’re afraid of calories, stop! The fat in nuts are actually good for you. Also, if you take a look at the calories in fat-free peanut butter and its regular fat counterpart, you’ll find that the calories are about the same. That’s because there’s more sugar in fat-free peanut butter. If you really want to health it up in the peanut butter department, go for one that doesn’t contain hydrogenated oil and grab the natural kind instead. Yes, you’ll have to stir it, but you’ll cut out some of those bad fats that you’ve been trying to avoid.

Don’t let this grain’s resemblance to quinoa fool you. Most couscous (and ready-made dishes that contain it) is refined. In other words, it delivers all the nutrients of refined pasta – which is very little. You can find whole-grain couscous, but it’s a little bit of a hassle. Try other grains, like quinoa and amaranth instead.

A whole grain, low in fat and calories, and known for its ability to help combat things like heart disease, oatmeal is the true breakfast of champions. Its convenient version is not. Those flavor packets contain tons of sugar and – strangely enough – sodium. Make your own instead. You can add your own fresh or frozen fruit, molasses, chia or flaxseed, or a bit of holy to get that sweet taste – and all of them are actually good for you. So is cinnamon, which gives bland oatmeal a fun flavor for the kiddos (or you).

Agave made its way into the health food circles about a decade or so ago. Because it had a low-glycemic index, it was thought to be better for you than sugar, honey, and other traditional sweeteners. Unfortunately, research has revealed that it could actually be worse than high fructose corn syrup. Experts now believe it is converted into fat faster than glucose, which could lead to rapid weight gain if you use it often, and it may also increase insulin resistance in both diabetics and non-diabetics. It could also be bad for your heart. So toss out the agave and go for more natural sweeteners. Molasses contains some nutrients and honey has antioxidant properties and could help reduce allergy issues if you purchase the kind made locally. Both are great sweetener options, as long as you use them in moderation.

Meatless Mondays – a trend meant to help reduce the carbon footprint of typical omnivores – has gained a lot of traction the last couple of years. Veggie burgers might seem like a healthy way to do that. Unfortunately, most contain more fillers than actual vegetables. Try searching for ones that list vegetables as the first ingredient, or search out an easy bean and veggie burger recipe. (My personal favorite is a spicy chickpea BBQ burger.)
Packaged/Deli Turkey??In the world of meat, turkey is one of your better options. Unfortunately, that doesn’t transfer over to packaged or deli turkey sandwich slices. These are processed meats, which are chocked full of sodium and have been linked to an increased risk of colon cancer. If you really want a turkey sandwich, cook a real turkey. You can package up the meat in small freezer bags, store it in your freezer or deep freeze, and then just pull it out to thaw for your sandwich meals each week.

Bran is good for you. Bran muffins are not. Sure, they still contain fiber, but the sugar, fat, and refined flour kind of cancels out any benefits you might have gotten from the bran. In fact, you may actually get fewer calories if you ate a doughnut from the gas station.

When you have picky eaters or find yourself on the go all the time, drinking fruits and veggies might seem like a great way to get in the nutrients. Unfortunately, most are chocked full of sugar and contain very little fruit or vegetable. Further, those that do have actual fruit or vegetables have all the fiber – the good parts – removed. Still, need to get your nutrients on the go? Try blending up whole fruits and veggies in your blender with either yogurt or almond milk. You can even toss in things like chia, flaxseed, oats, and hemp seeds to boost your nutritional value of the smoothie.

There was a time when organic actually meant something. Sadly, it has turned into more of a buzzword and is used by food manufacturers and marketers in ways that are downright infuriating. Sure, the contents might be organic, but organic cane sugar is no better for you than actual sugar. Further, your processed foods often contain fewer nutrients than actual food. So, rather than buying those organic fruit snacks for your kids, give them actual fruit. Don’t be fooled into thinking that organic mac and cheese is actually better than Kraft. Instead, make your own with actual, real cheese and whole-grain noodles. (Parent tip: You can also sneak in some vegetables or beans by blending them, or add nutritional yeast or flaxseed to homemade mac and cheese. Any of these options can increase the nutrients your kids are getting from their favorite dish.)

While many of us would like to think that we can get away with eating more of our guilty foods by switching over to margarine, vegetable oils, or dairy-free spreads, the truth is that these items should be used just as sparingly as butter. It is also important to note that some oils may not be good for you in the long-term (despite the claims). Examples could include coconut oil, canola oil, and margarine. In fact, some studies have linked them to an increased risk of heart disease, despite lowering your cholesterol in the short term. So remember: oils, butters, and other forms of fat should always be used sparingly.