Home » Fortified Breast Milk May Not Be Best For Preemies 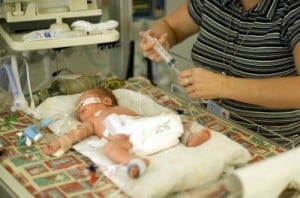 Most doctors will tell you that breast milk is the best thing for a premature baby to have. For very tiny preemies, the milk is often fortified with additional protein to help increase growth. However, a new study suggests that this boost may not improve preemie weight gain after all.

Dr. Gitte Zachariassen, a pediatrician at Hans Christian Andersen Children’s Hospital in Odense, Denmark, lead the study of 320 premature infants. The infants, each born weighing less than 5 pounds, were studied to see how their weight gain continued after birth. Of the infants studied, 207 were being breastfed when they were released from the hospital. Researches selected half of the breastfed infants to receive the special fortified breast milk while the other half received regular breast milk. Those who did not breastfeed were given a special formula meant for premature infants.

At the end of a year, the infants were measured against each other to see if those who received the special fortified breast milk had improved weight gain. Researchers found that there was no difference in size between those with the extra fortification and those receiving regular breast milk.

More research is necessary on breast milk fortifiers, but Dr. Zachariassen believes that a higher dose may be more beneficial for infants. Because there was no significant change in growth, the doses given currently may not be enough to add an additional benefit to premature infants. Still mothers should try to breastfeed their premature infants for as long as possible because it does provide a boost to their health and growth.