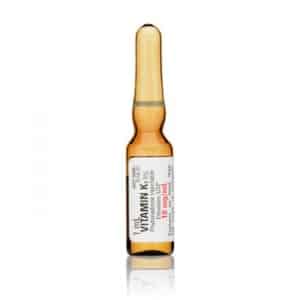 There are medical procedures that have been around since before some of our parents were born – most of them were adopted for reasons that we don’t fully understand. Case in point: the intramuscular vitamin K shot, which became standard practice in 1961. It is this shot – or rather the absence of it – that has been traced back to the severe complications suffered by four infants in Tennessee.

Vitamin K is known as the “clotting vitamin” because its presence is absolutely essential to the clotting of blood. A deficiency in this vitamin can lead to severe bleeding, otherwise known as vitamin K deficiency bleeding (VKDB). This rare and potentially life-threatening condition occurs during early infancy because vitamin K does not easily pass through the placenta, and breast milk does not contain high enough amounts; in other words, infants do not have high enough vitamin K stores on their own.

To protect infants from VKDB, doctors administer small amounts of vitamin K immediately after birth. Initially, this was given only through injection. However, after a 1992 study linked the injection to childhood cancer (a study that has results that have not been duplicated, nor have been disproven), some doctors started providing and advocating for oral vitamin K administration after birth.

Parents of the four infants in Tennessee diagnosed with VKDB had all declined vitamin K when their babies were born. Their reasons included the desire to decrease their baby’s risk to toxins, concerns over an increased risk of leukemia, and an impression that the vitamin K supplementation was unnecessary.

All four of the infants had been healthy until they reached between six and 15 weeks of age. They then developed sudden internal bleeding – three had intracranial hemorrhaging and the fourth had gastrointestinal bleeding. A twin of one of the infants was also found to have an asymptomatic case of vitamin K deficiency.

At this point three of the affected babies could face a life-long impact from issue. While the infant with gastrointestinal bleeding has recovered fully, the infants that suffered from intracranial bleeding are still under constant neurological surveillance. One has already developed a gross motor deficit, and it is unclear as to whether or not any long-term effects will be suffered by the remaining two.

Public health officials in Tennessee determined that some of these parents had only learned of VKDB after their infants had developed the conditions. For this reason, health officials are saying that physicians need to be more clear about why certain treatments, like the vitamin K supplementation, are being given at birth or shortly after. This may help parents make safer, more educated decisions regarding the care of their infants, especially during the early months when their children are the most vulnerable.