Home » Four Women, One Father and the Birth of Twiblings 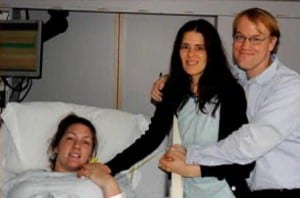 For 41 year old Melanie Thernstorm marrying a man five years younger to her did not seem like an important age difference until the couple discovered that Melanie was infertile. From childlessness to hope and being parents to two babies born with the help of an egg donor and two surrogate moms, the journey the two took to  just be parents is incredible.

Melanie had already gone through four unsuccessful IVF cycles when she asked the doctor to consider a fifth cycle.

“I’m not comfortable with it,” said the doctor. “When a doctor offers you a treatment, there is an expectation that that treatment could work.”

“Realistically, you need to consider other ways to have a family,” he said.

But Melanie wanted to keep trying, especially for her husband Michael who had always wanted children.

The two considered adoption but were discouraged by the various processes and criteria involved. One adoption agency even told them that most birth mothers preferred younger women and that they were ‘competing’ against other couples.

Melanie and Michael finally found a doctor who was ready to try a fifth round of IVF. But the bad luck continued as the embryos did not survive and even a sixth attempt failed. Melanie was also informed that she had developed a medical condition that posed risk to a fetus’s health. The disappointment and the longing to have a baby only grew.

It is then the two consulted a perinatologist, a high risk pregnancy specialist.

Melanie realized then that her ultimate goal was to have a healthy baby and she began researching on surrogacy and egg donation.

The couple had also wanted twins so that the children born would be of same age, companions to each other. However, their doctor discouraged the idea.

“The fertility industry has convinced themselves that twins are safe and only triplets are high-risk, but they’re not,” he said. “They don’t see the babies after they’re born. Take a look at a NICU sometime.”

Melanie understood the doctor’s point as she found that from 11 in 1000 birth to 32 in 1000 births the number of twins born in US had increased manifolds. 60 percent of these twins were premature likely to have disabilities and might require constant medical attention.

That’s when Michael came with an idea. “If we really want our children to be the same age, we can try to find two carriers now and do the pregnancies in parallel,” Michael said.

The idea seemed crazy at first but soon they began searching for two gestational surrogates. After 6 months their hunt led them to Melissa, a 30 year old nurse who was a mother of two and lived with her husband in a suburb in Portland. They also found Fie a 34 year old who lived with her husband and three children on the Oregon coast where she worked as a senior accountant for a community-development organization.

The couple then looked for a donor and found one with the help of their fertility doctor John Hesla who strongly believed that the donor would suit their family.

After the eggs were fertilized and transferred,  Melissa and Fie both gave birth to Michael and Melanie’s babies. First came Kieran, their son and five days later Violet was born. 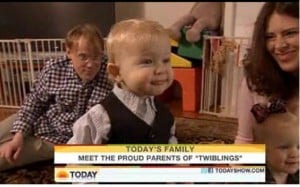 The babies a year old now and when Melanie is asked if they are twins she says they are ‘twiblings.’

“When people press me about their status (“But are they really twins?”), the answer gets long. The word “twins” usually refers to siblings who shared a womb. But to call them just “siblings” instead of “twins” also raises questions because full genetic siblings are ordinarily at least nine months apart. And our children could be considered the same age because they were conceived at the same time (in the lab) and the embryos were transferred at the same time. If the person continues to quibble about whether they really qualify as twins (as, surprisingly, people often do), instead of asking why it matters, I announce airily that they are “twiblings.”