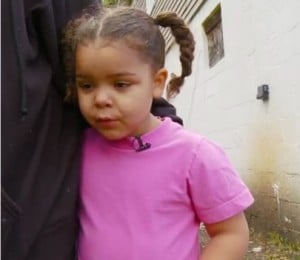 Four-year-old Kizzy Adams won’t be riding the school bus again anytime soon.  In fact her parents are looking for a school bus driver and their aid to be charged with child endangerment after their daughter was left on the school bus for 6 hours.

The day started like any normal one.  The pre-schooler’s father put his little girl on the bus at 7:45 like every morning but when she didn’t come home her mother, Rita Adams, called the school to see where she was and they said she had been marked absent for the day.

When a frantic search turned up nothing at the school, officials looked to the bus yard and found Kizzy locked inside one of the buses — sweating, upset and having to go to the bathroom.

Rita was told that the original bus was having technical issues so they went back to the yard to change buses.  When moving the kids from one vehicle to the other they did not, however, take a head count and the four-year-old was forgotten on the bus.

“This is an oversight that cannot be tolerated. It is the responsibility of the bus driver and any adult aide on the bus to check every row to be sure all students have exited the bus…”

While the driver and the aide have been placed on paid administrative leave pending an investigation, Kizzy’s parents want more done.

“It was 60-degrees. Had it been even today, or the day before, she wouldn’t have been so lucky,” Rita said.

Police have forwarded the case to the Mansfield City Law Director to determine if child endangerment charges will be filed.