More sadness today for Amanda and Thomas Stansel after their fourth sextuplet was disconnected from life support last night. 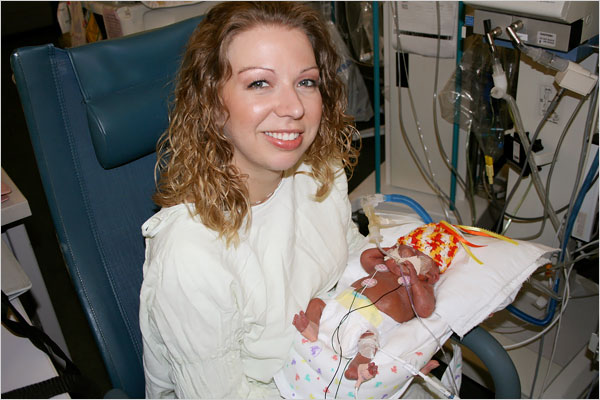 According to the couple’s blog, Ashlyn had been fighting a nasty form of pneumonia call Yeast pneumonia for about a month.

Ashlyn is not doing well at all. Her kidney function is getting worse. She is in renal failure and this is making the edema worse. The doctor said that her kidneys are beyond the point to where they could get better. They are just too far gone. They had to increase the ventilator settings to provide more support. She is just not doing well overall. This has been so hard. It hurts to see her so sick. We hoped and prayed that she would get better, but it is just not the Lord’s will for her.

The decision to withdraw care was made last night after the tiny baby’s oxygen saturation had dropped into the 50’s and 60’s(a healthy person’s O2 Sat’s are usually 99). The lower the number, the more oxygen needed from the ventilator to compensate.

Thomas and Amanda welcomed their sextuplets just over 2 months ago, weighing between 12.3 ounces and 1 pound, 2 ounces at 23 weeks gestation. Just a couple days after their arrival the couple lost Dallin and Katelyn, followed by Braden a few weeks later.

While this has been a rough journey for the couple they are still very optimistic about the 2 remaining babies; Hailey and Rachel.
Amanda blogged that:

We hope and pray that Haley and Rachel continue to grow and develop, so that we can bring them both home some day soon.

I also hope that they are able to bring these two girls home as well. Because both babies are still vented, they may just be home in time for the Holiday Season.