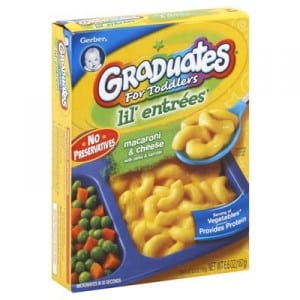 Gerber has received the “Salt Lick Award” for their Chicken & Pasta Wheel Pickups meal in the Lil’ Entrees line. The single meal contains 550 milligrams of salt, more than half of a toddler’s daily limit.

The Canadian Stroke Network and the Advanced Foods & Materials Network gave Gerber the reward after looking at the amount of salt the single meal has. Though all of their Lil’ Entrees meals contain large amounts of sodium, the Chicken & Pasta Wheel Pickups was the highest of all. The one meal contains as much salt as two medium orders of McDonald’s french fries.

Despite the high levels of salt, labels on the Gerber meals claim that the meals are safe for toddlers to eat. A spokesperson for Nestle, which owns Gerber, says they are working on lowering the salt levels and this is a key priority. Dr. Andrea Papamandjaris, head of Nestle’s medical and scientific unit, says the labels overstate the sodium levels in the food as they also include the salt used in the liquid to preserve the vegetables. This liquid, she says, is meant to be drained off. Packaging will be changed this year to reflect lower levels of salt in the food. The lower amounts will only be for the salt in the actual food, not in the liquid brine surrounding the meal. This will put the sodium levels at 19-33 percent lower.

Opponents, however, say the salt in this brine can still be consumed. PhD in Parenting says, “I cannot stress enough that the best thing you can do to decrease the sodium in your family’s diet is to rely on fresh food, rather than processed food.”

Dr. Kevin Willis of the Canadian Stroke Network says eating heavily salted foods at a young age can lead to health problems later on. “There is a concern that eating too much sodium in childhood can lead to a preference for salty foods and, consequently, an increased risk of disease as an adult,” said Dr. Willis.

Too much salt in the diet can raise blood pressure and has been linked to obesity, stomach cancer, and heart disease. It can also increase the chances of suffering a stroke. 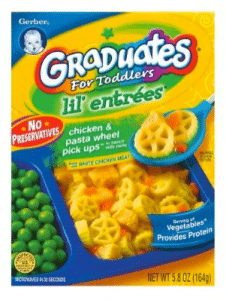 The list of toddler meals considered to have excessive sodium includes: