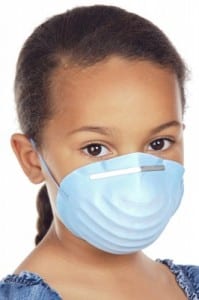 All across the world, parents whip out their cleaning wipes and disinfectant sprays at the slightest sign of a cold, the flu, chicken pox or any other communicable disease. But are we really doing our kids any favors? Are we actually increasing their susceptibility to such illnesses? A recent study seems to think so.

In a study that could mean big profit losses for the manufacturers of disinfectant products, researchers examined a hypothesis known as the “hygiene hypothesis” which proposes that lack of exposure to microbes early in life can actually increase susceptibility to certain diseases. This includes some immune-related diseases like allergies, asthma and colitis.

To test the theory, researchers bred lab rats so that they would be able to develop forms of asthma and inflammatory bowel disease. They then divided the rats into two groups – “germ free” (GF) and specific-pathogen-free (SPF). Germ free mice were bred in and lived in a sterile environment. Specific-pathogen-free mice were raised in a normal laboratory environment. Various tests were performed to see each group of mice’s immune system responded.

When kept in a sterile environment from birth to death, GF mice were found to have more invariant natural killer T cells (iNKT) in their lungs and in their bowels. T cells are important to the body, but if there are too many, they can actually attack the body’s natural immune system, increasing the body’s susceptibility to inflammatory diseases, which can result in death. Such was the case with GF mice, but not so with the SPF mice.

“…we show that, in germ-free mice, invariant natural killer T cells accumulate in the colonic lamina propria and lung, resulting in increased morbidity in models of IBD and allergic asthma compared to specific-pathogen-free mice,” the authors wrote.

They also found, however, that they could alter the outcome by exposing the GF mice to germs within the first few weeks of life. Those who were included in this test were not found to have high levels of iNKT cells and severity of symptoms was less when compared to GF mice who had never been exposed to such germs.

Unfortunately, the researchers found that the exposure had to happen very early on for the mice to receive any potential benefits. Mice that were exposed to the microbes during their adult life still had the same symptom severity and morbidity rate.

One of the two lead authors on the study, Dr. Richard Blumberg, chief for the BWH Division of Gastroenterology, Hepatology and Endoscopy had this to say:

“These studies show the critical importance of proper immune conditioning by microbes during the earliest periods of life. Also, now knowing a potential mechanism will allow scientists to potentially identify the microbial factors important in determining protection from allergic and autoimmune diseases later in life.”

Researchers do state, however, that this is only a preliminary study conducted on mice. It is, in no way, indicative of whether or not humans would respond the same way. Human testing will be needed to determine the efficacy of germ exposure tactics in children.

Still, it would seem to make sense, in my mind. Most types of immunizations contain a diluted form of the virus to build our immune system. Why wouldn’t other microbes increase our immunity to certain conditions?

The big picture, however, is rather hazy. If things pan out in the future (which I believe they may), then parents are going to have to be educated on which microbes are safe to expose children to and which are not. For example, if you have the flu in your home, you may not want to wipe down everything and sterilize everything, but microbes that cause conditions like meningitis or E. coli will probably still need to be disinfected for. It will definitely be interesting to watch where this study goes.