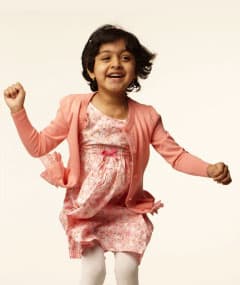 Image VIA Coast to Coast Against Cancer

In November of 2007, when Arhum Noor was born, her mother could hold her for only three minutes before the newborn was whisked away for a heart surgery. Born with a defective heart, although the baby girl was saved with a timely heart transplant, at five years old she now battles cancer as a result of that transplant.

Arhum Noor looks like a normal five year old playing while her playing with her father Abdul Rahman and 19-month-old sister Mahum. But her life has been less than normal in the last five years, with a string of health challenges since her birth.

On Nov. 9, 2007, before Noor was born, Asma was told by her gynocologist that the baby had a problem with her heart and she might need to have surgery for the birth.

Noor was delivered via an emergency C-section as her heart rate dropped.

“I held her for less than three minutes before she was taken away from me,” Asma recalls.

At 3 days old the newborn had her first open heart surgery to insert a BT shunt. Within 24 hours she had to be revived three times and was eventually placed on a heart and lung machine to keep oxygenated blood flowing through her tiny body.

“By this time, her own heart was dead,” says Sabir. “When I left her that night, I was not sure what was going to happen.”

The next day doctors informed her parents that Arhum Noor would need a heart transplant and even then the chances of her recovering were dim.

Asma could not believe what she had heard and kept thinking whether to let go or wait for a donor heart.

“I prayed to God, ‘Please don’t let me make this decision. Please make it for me.’ ”

The doctors soon called and informed them that they had found a match for Noor. The parents had 40 minutes to decide whether to go ahead with the surgery.

Asma’s husband was working in Saudi Arabia at the time. She called to give him the news and they decided to say yes for the transplant. It was nothing less than a miracle to find a donor heart so soon for a baby. According to doctors the biggest challenge is to find a donor heart for babies less than a year old but if the transplant is successful they heal better than adult heart transplants.

SickKids hospital in Toronto is among the leaders in pediatric heart transplants in North America, and does 15 surgeries a year, says Dr. Anne Dipchand, head of the hospital’s heart transplant program.

“About 70 per cent are still alive into early adulthood,” says Dipchand.

The surgery was a success though Arhum’s chest was open for a week to help ease the swelling. Two months later she was able to go home for the first time since her birth.

At six months old, the baby girl visited her dad in Saudi Arabia and met her for the first time.

“When she saw her dad for the first time, she literally jumped on him,” says Sabir.

“It’s been hard on me,” her father says, “but (Sabir) has been handling everything alone.”

It took Rahman another two years to get immigration approval, during which time Asma got the support of her family and friends.

Finally, the family is now together with Rahman working in a motel in North Bay.

Baby Noor grew up well and was doing good for three years.

“We thought we were in the clear,” Asma says.

But in 2011 came the family’s first major shock after the transplant. Arhum was suffering from PTLD, a cancer affecting 10 percent of child transplant patients.

Just about the same time the family also found that her younger sister Mahum too was suffering from a problem with her kidney. The baby girl had to undergo a surgery but she still does not have function of her kidney.

Noor, now a five year old has undergone two rounds of chemotherapy and she always wants her father to be beside her.

“Fortunately, or unfortunately, she always wants to be with me,” he smiles. “She is very brave. She’s the one who keeps us going. When we see her happy, how can we be sad?”

Hopefully, their two beautiful daughters will be healthy and they never will have an occasion to be sad.