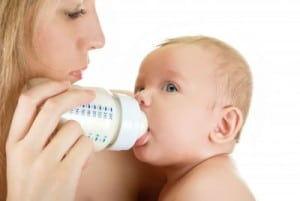 A group of German scientists have dismissed the claim that giving newborns cow’s milk could help them become more tolerant to it.  They suggest sticking with the current advice, no cow’s milk until at least 12 months.

Among the myths and wive’s tales about parenting, one of the more common is that infants can develop a tolerance to cow’s milk by drinking it soon and early enough. Scientists, however, say this belief is not true. Writing in the Journal of Allergy and Clinical Immunology, the scientists and doctors have tackled an earlier article about cow’s milk and human newborns.

Previous studies suggesting that infants could learn to tolerate cow’s milk are said to have a conflict of interest. In part, because funding for the studies comes from the dairy industry. The industry’s interests in the study may have biased the research to their results. Data from the German Infant Nutritional Intervention study was studied instead to a much different result.

This second study found no proof that infants could develop a tolerance to cow’s milk is given the drink early enough. Instead, the researchers suggest parents stick with breastfeeding and not move to cow’s milk until at least 12 months of age. This is the current recommendation that many health groups also suggest. – Summer, staff writer