A grampa of seven still can’t believe that he was just saved by two babies. Fighting cancer, 60-year-old David Pyne was given about a year to live after all treatments proved unsuccessful. But thanks to his two infant saviors and the timely stem cell transplant, the granddad has beaten leukemia.

In August 2012 the dad of four and grandfather to seven grandchildren was diagnosed with leukemia. His treatment included chemotherapy and blood transfusion.

But the treatments were unsuccessful and the only option left to save his life was to receive donor stem cells. When a match could not be found and with no other choices, David was given 12 to 18 months to live. 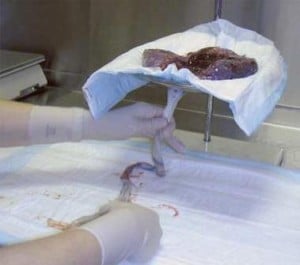 Luckily, he was offered stem cells from the umbilical cord of two babies – one in America and the other in France.

“Things were looking pretty grim until I got the news about the possibility of an umbilical cord stem cell transplant. The team found two separate umbilical cord donors that were a good match. I felt elated. It was something to hope for, like a lifeline was being thrown to you. I grabbed it with both hands and hoped for the best.”

David who lives in Wythenshawe, Manchester, was treated in September at The Christie Hospital in the city. After spending six weeks in the hospital, he is now in remission.

“To think two newborns saved an old man’s life is just marvellous and it’s given me more time with my own grandchildren,” David said.

“Umbilical cord blood is very rich in stem cells, which being so immature have phenomenal regenerative powers. These were a great alternative source of cells for David, in fact the only option, as after a worldwide search he had no other donor.”

For patients like David who are fighting blood cancer, the stem cell transplant has indeed come as a boon. The stem cells of the blood from the umbilical cord are so young that they are readily accepted by the recipients body which replace the damaged blood cells.

Doctors believe that many more lives could be saved if more stem cells were harvested and used for such transplants.

In recent years many would-be moms have become aware and begun to save the umbilical cord cells for future use for treating critical health conditions, but still around 65,000 liters are thrown away every year.

Approximately 80 percent of transplant cases could be met, if 50,000 units of cord blood were saved, doctors feel.

Hopefully David’s story will inspire many more to save these life cells.