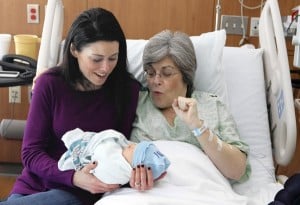 When Kristine Casey gave birth to a child on Wednesday in Illinois at the age of 61, it was an unusual delivery. Not just because of her age, but also because she delivered her own grandson Finnean Lee Connell.

Kristine is possibly the oldest women to give birth in Illinios and she willingly accepted the role of a surrogate mother for her daughter Sara Connell and her husband Bill who had been trying for a child for years. What makes the arrival rare is that Kristine carried their child to full term 10 years post menopause.

When the baby was delivered via C-section and Sara held him for the first time she said, “I lost it, It’s such a miracle.”

Even the medical team in the operation room got emotional.

“The surgery itself was uncomplicated, and the emotional context of this delivery was so profound,” said Dr. Susan Gerber, obstetrician and maternal-fetal medicine specialist at Northwestern Memorial Hospital.

The Connells had been trying for a baby since 2004. Sara realised early on that she was not ovulating and went through infertility treatments at Reproductive Medicine Institute in Evanston. She soon got pregnant but delivered stillborn twins, and later she suffered a miscarriage.

Kristine, on the other hand, had three healthy pregnancies.


On a visit to Chicago she attended a women empowerment workshop with Sara on life goals. Here, she chanced upon a picture of an ostrich with an expression of wonder and  joy and thought how she could achieve the same joy. Around the same time Kristine also came to know from a friend about a post-menopausal woman who had given birth.

“I thought, ‘Wow, three of the happiest days of my life were giving birth to my daughters,’ and I thought I could choose to do this for someone I love,” Casey said.

It was then that she decided to be a surrogate and wrote to Bill and Sara.

“I found something that would make me feel like that ostrich, What do you think of this?…I won’t do this just to make me happy because, believe me, I could find other things to do,” she remembers writing.

At the time, Kristine was 10 years past menopause.

For post-menstrual women it remains a rarity to give birth but in recent years the possibility has raised due to artificial fertility treatments like IVF. For older women the risk of pregnancy may also be higher and some experts believe not all women are fit to get pregnant after menopause.

“It’s going to be more risky for somebody who’s got underlying conditions,” said Dr. Alan Peaceman, one of Casey’s doctors. “Because of that, we recommend that patients have a cardiac evaluation.”

The couples were a bit sceptical at first as Bill thought it might not be medically possible though he acknowledged his mother in law’s noble gesture.

“I just wanted to make sure the science was there,” he said. “I didn’t want us to subject ourselves to another very risky, possibly devastating, scenario. Infertility is one thing, but putting your mother-in-law in danger kicks it up to another level altogether.”

The family discussed the idea with experts at the Reproductive Medicine Institute.

“The idea of having a family member being open to doing this for us was so extraordinary for us,” Sara Connell said.

Kristine’s husband was also a bit worried at first considering her age but once the doctors gave a thumbs-up and she cleared all medical tests, he too agreed.

“What made the difference for me was when Kris said it was a calling from deep within herself,” Bill Casey said. “You can’t get any more compelling than that.”

After multitude of medical and psychological tests, and a mandatory legal agreement, Kristine got pregnant on the second cycle of an in vitro fertilisation with an embryo transfer. She was also given hormones to prepare her uterus.

“If you give the uterus hormones, it will act like a young uterus,” said Dr. Carolyn Coulam, a reproductive endocrinologist at Reproductive Medicine Institute. He adds, “It usually is a function of the age of the egg, not the uterus, whether or not the pregnancy will be successful,”

Still age limits are set for surrogacy as the doctor clarifies, “”The issue comes up because as a woman gets older, the risks she takes in pregnancy clearly go up — everything from high blood pressure and diabetes to premature delivery and infant death,” Cohen said. “So one has to be clear about what those risks are.”

For Kristine’s case the doctors agreed because of her fit medical and psychological tests.

“It takes a significant commitment to be a surrogate in any circumstance. To take on this type of physical burden at this age is not anything anybody should take lightly.” stressed the doctor.

After Finnean arrived, Kristine had a kidney complication that doctors looked after. She now plans to go back to her home in Virginia and enjoy the more traditional role of being a grandmother.

“From the very beginning, the moment I’ve wanted is the moment the baby is in their arms,” she said at her daughter and son-in-law’s home weeks before the birth. “I’ve been clear since after my third child that I didn’t need to have any more children, and as much as I will be delighted to be a grandmother, I don’t want to take a baby home.”

Sara describes her mother’s gesture as a ‘special gift’

“It grew beyond the two of us having a child,” Sara said. “It was about the closeness with my mother, and our family having this experience that was unique and special.”