A young Indiana mom is telling her story after her 2-year-old son died last month from what was initially diagnosed as a “little bug.” Kayla Dunham said on Facebook that her son Grayson “was taken from us too soon for reasons we will never understand.” 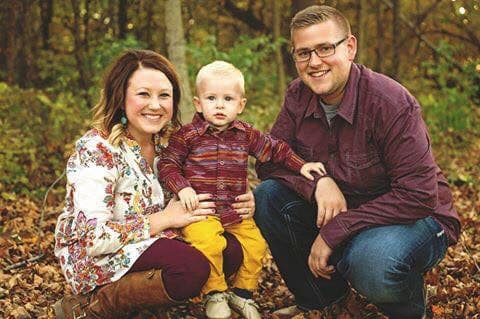 On the morning of August 10 the little boy began to vomit and experience diarrhea. Doctors couldn’t pinpoint a cause, even after Grayson had a battery of tests that included stomach and chest X-rays and ultrasounds. Initially, he was diagnosed with stomach flu. Later, doctors said that it seemed his intestines had folded over themselves. Later still, they though the appendix might be the cause of his illness.

Doctors misdiagnosed five times while Grayson’s symptoms worsened and his pain grew. Then they told the family that the child had HUS.

According to the Kidney Foundation of Canada, HUS is hemolytic uremic syndrome, sometimes referred to as “hamburger disease.” It often follows a gastrointestinal illness brought on by a dangerous strain of E coli bacteria, and this particular strain (the 0157:H7) causes permanent damage to the kidneys and liver.

While everyone is susceptible to infection from E coli, pregnant women and those with compromised immune systems, the elderly and young children face a greater risk of serious complications from the illness. The Kidney Foundation of Canada has warned that HUS poses a “substantial threat to Canadian children as one of the leading causes of acute and chronic kidney failure.”

In cases of E coli, the Centers for Disease Control and Prevention say that antibiotics shouldn’t be used to treat the infection since they may increase the risk of HUS. The preferred treatment is re-hydration. Doctors did try to re-hydrate Grayson, but the treatment came too late.

As the little boy awaited surgery and dialysis, his heart gave out. Dunham says that more than twenty doctors performed CPR on her child for close to two hours in a desperate effort to save him, but the bacterial infection in his tiny body was “just too severe.”

The heartbroken mom shared her story on Today in hopes it will help other families avoid a similar tragedy. It’s unclear where Grayson picked up the infection, but his family had recently visited the state fair, a restaurant, and a petting zoo.

Kayla is grieving for her young son but trying to stay strong for the baby that she is carrying. The little girl, due in January, will be named Grayson in honor of the big brother she’ll never get to meet.