It’s a subject that is painful to talk about, but one that so desperately needs attention. Every year, dozens of children die because of being left in the back of hot cars. This year alone, seventeen children have passed away. The year before that, the rate of children dying in hot cars was up 25 percent. The family of one of these children touched by this unspeakable tragedy is speaking out. 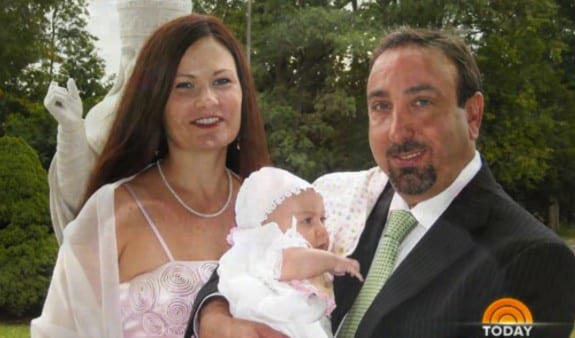 The moment that Brett Cavaliero realized that he had left is one year-old in the back of the family’s hot car is one that will forever haunt him. It was May 25, 2011, when he had put his daughter Sophia Rayne, who the family had lovingly nicknamed “Ray Ray,” into the car, getting ready to drop her off at daycare. However, he had driven to work instead. It was not until his wife Kristie met him for lunch and questioned why the daycare teacher hadn’t mentioned the cute outfit their daughter was wearing, that it hit Brett that she was still in the back of the car, on a 90-degree day.

Paramedics arrived on scene and spent forty minutes trying to revive the young girl, but to no avail. Sophia passed away just ten days after her first birthday. Now, the Cavalieros are channeling the grief that they’re experiencing into a positive experience. The couple have created Ray Ray’s Pledge, a project meant to prevent tragedies like the one they experienced by employing a daycare drop-off system, with the daycare facilitators phoning the child’s parents if the children are not dropped off at their designated drop-off time. It’s a phone call that could mean the difference between the life and death of a child.

Kristie Cavaliero talks about the project, “We’ve really channeled our grief and our pain into what we hope will be a positive contribution by trying to prevent this tragedy from happening to other parents who are not aware that this is a danger that they could become susceptible to.”

The Kids and Cars website suggests using the following tips, to make certain that a child is not forgotten in the back of a hot car: