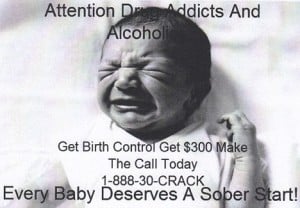 Project Prevention is using some controversial methods to try and decrease the number of infants born addicted to drugs and alcohol. Offering drug and alcohol addicted men and women $300 in cash to get sterilized or take long-term birth control options, like IUDs or Depoprovera shots, the group is accused of violating both civil and human rights. They are even being accused of “racism.”

Some of the controversy could stem from the startling messages they hang in homeless shelters and clinics. Posters that feature messages like: “Don’t let pregnancy ruin your drug habit,” and “She had her daddy’s eyes….and her mommy’s heroin addiction.”

But there’s more to this program than meets the eye. Founder Barbara Harris started the program after she and her husband adopted four different children from the same crack-addicted mother.

“I witnessed firsthand how these innocent babies suffer after spending months in the womb on a steady diet of crack, alcohol and whatever their [birth mom] decides to try,” said Harris. “If you’re a drug addict, we’re looking for you, and I don’t care what color you are, because we don’t even know what color your baby will be, because often these babies comer out all different colors, you know what I mean?”

Harris is not incorrect, by any means, about the devastating effects that addiction can have on an unborn fetus. Infants born addicted to both legal and illegal substances most often go through withdrawals for weeks, maybe even months. They scream in pain and comforting them is often impossible. The pain from the withdrawal can lead to disruption in neurological development, which can lead to long-term effects. Additionally, infants born to mothers with substance abuse problems are at a higher risk for certain birth defects.

Many critics are calling her efforts “racist,” despite the fact that two-thirds of the women who have participated in the program were white. But what most critics seem to be focusing on is the “ethics” of paying addicts money for sterilization and birth control.

One of the many critics of the program, bioethicist Arthur L. Caplan, the soon-to-be head of the medical ethics program at New York University had this to say about Project Prevention’s program:

“Anything that involves permanent sterilization for money is a bad idea. The women are too young, too impressionable to make that kind of irreversible choice. I think it should be taken off the table completely. The solution to having babies when you’re not ready is not to make more bad decisions. Pregnancy and addiction are terrible problems. But they’re not going to get solved by throwing a Band-Aid of $300 incentives to the poorest women with these problems. You’re out there focusing on one segment of the population. Why only focus on addicts? Not people with high blood pressure, diabetes? The notion that addiction is somehow passed on to future generations strikes me as bad science.”

Despite Caplan’s concern over the “age” of women receiving services from the program, Harris says that the last 20 women she has paid for participation have had a total of 121 children between them – thirty of which were aborted, stillborn or died shortly after birth; the remaining 78 were placed in the foster care system sometime after birth. Harris also added that most of the women who have participated opted for birth control, rather than sterilization.

“I think it’s really important for people to understand that the majority of women we sterilize are women who have had multiple children and don’t want any more. It’s their decision,” said Harris. “And to say, ‘Let’s go ahead and let them keep having babies because one day the might decide to clean up and keep one?’ It’s just not fair. And it’s preventable.”

Still, there are avid supporters of the program – supporters like Facebook user Bruce Thyer (as well as nearly 2,000 other likes on the social site.)

“As a social work professional, I applaud the great work being done by this organization to enable addicted individuals t not have to worry about getting pregnant, and to prevent the birth, without recourse to abortion or babies to parents who are substance abusers and often not able to provide quality parenting,” Thyer wrote.

There are a lot of angles that you could look at this program from – the “ethics” of paying a drug addicted individual to receive sterilization or birth control, the decision-making abilities of said drug addicted individual, the fate of the infant born to the drug addicted parent (that, in and of itself, could take up an entire post), the “ethics” of standing by and watching these innocent babies being born and then dying or ending up in the already over-saturated foster care system, the sheer inhumanity of not trying to do anything to stop the pain and suffering that the infant will undoubtedly go through after birth, the guilt that the mother who may not have had a way to prevent the pregnancy without help will feel after she does (if she does) clean up her act.

It’s certainly not a topic for the weak or light-hearted. It is a tough and difficult discussion. And everyone is bound to have their opinions. But I think that those who are most entitled to a voice in the matter are those that the topic affects directly – the addicted, the born addicted, the adoptive and foster parents of the addictive and the foster care system that must try and place these children in homes that can adequately cope with them.