Home » Gwen and Gavin Tote Their Boys To The Science Museum

Rocker couple Gwen Stefani and Gavin Rossdale were spotted yesterday taking their boys Kingston and Zuma to the California Museum of Science in Los Angeles. 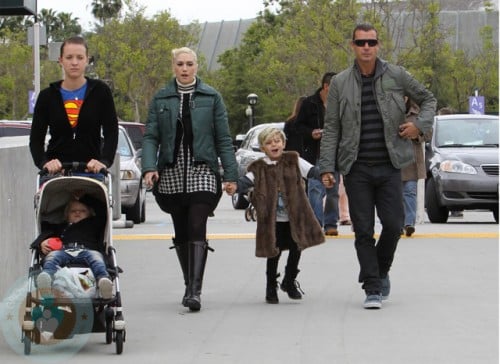 On Thursday it was announced that Gwen had personally donated $1 million to the ‘Save the Children’ fund, following a similar donation by Sandra Bullock to the Red Cross. She is also set to auction a meet-and-greet with herself to raise money for the Japanese Tsunami relief.

In a statement released on her band’s website NoDoubt.com, Gwen announced that her fans will have the chance to bid to join her at a special fundraiser in Los Angeles.

The singer has cited Japanese culture as a major influence in her career as a solo artist and fashion designer.

“I’ve been inspired by Japan for many years and have a true love, appreciation and respect for the Japanese people and their culture. The disaster in Japan is beyond heartbreaking and I want to do anything I can to help. I would never be able to make a gesture like this without the love and support of all the fans over all these years.”