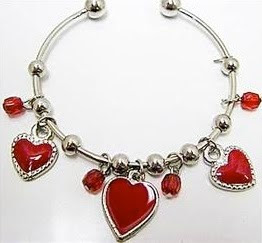 Health Canada has recalled over 6,200 Valentine charm bracelets yesterday after testing showed they were made of almost pure lead.

The bracelets with red heart-shaped pendants were sold at Dollarama stores across the country between December 2007 and February 2010. The jewelry which is made of 92 per cent lead, was manufactured in China and imported by Montreal-based company to be sold at many of its 603 locations across Canada.

This is the second time in as many months that Health Canada revealed a major Canadian retailer imported and sold children’s jewelry made of almost pure lead.

Wearing jewelry made of lead is not a health risk, but lead poisoning can be fatal if children chew, suck or swallow it. Scientific evidence shows lead is highly toxic to children, even at very low levels.

In 2006, a four-year old boy from Minneapolis, Minn., died of lead poisoning after swallowing a piece from a Reebok charm bracelet. The charm bracelet, made of almost pure lead, was provided as a free gift with the purchase of various styles of children’s Reebok footwear in the United States.

And in 2008, half of the children’s jewelry items tested at Health Canada’s product safety laboratory were made of almost pure lead.

A couple of years ago, Health Canada oversaw the targeted testing of 67 suspicious pieces and identified 39 with illegal levels of lead. Twenty of the metallic pieces were made of almost pure lead, with levels ranging from 80 per cent lead to 95 per cent lead. These levels are comparable to those found in lead-acid car batteries.