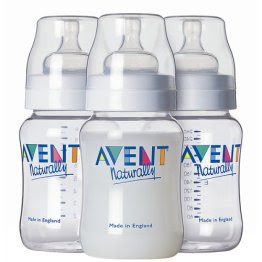 A New Health Canada test has shown that Avent baby bottles leached more than double the amount of BPA than a cheaper house brand bottle.

The study showed the bottles were not created equal.

The concentration level of BPA, an estrogen-mimicking chemical, in the water in the Philips Avent’s top-selling baby bottle, Avent Naturally, was 516 parts per billion. In the Teddy’s Choice bottle, made by Loblaw Companies Ltd., it was 228 ppb.

The Avent bottles containing BPA are no longer sold in Canada. Loblaw Companies did not respond to a request about the status of its Teddy’s Choice bottles.

Parents should take note of the results because older, hand-me-down bottles are still in circulation in households, despite a pending ban of BPA in baby bottles.

Health Canada said “uncertainty” raised in some studies about the possible detrimental health effects on babies when exposed to “low levels” of the chemical prompted the plans for the planned ban.

*After the proposed ban was announced in Canada, Avent introduced BPA Free options for parents. The concern expressed in this article is over older versions of their popular bottle.*