We already know that babies have personalities that are all their own, and when they want out, they want out. One United Kingdom mom learned that her newborn worked on their very own schedule this week, as the little one was born in an elevator, even before mom could make it up to the maternity ward. A hospital healthcare assistant is being hailed as a “guardian angel” after running to the aid of the laboring woman as she boarded the elevator. 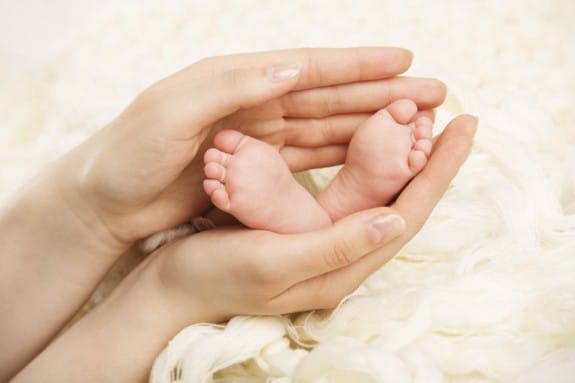 The McCarthy family didn’t expected their little girl to arrive so fast. New mom Nichola, 29, had gone into early labor on January 2. Nichola’s husband, Jim, 32, put his wife in the car and they made a mad dash for the hospital. However, things only sped up at that point. Nichola recalls what happened as soon as they arrived, “We got there really quickly and the moment we arrived my waters broke and I felt her head coming out. Jim ran into the hospital trying to find someone to help and grabbed a porter with a wheelchair. I was sitting in the car, it felt like the longest time and I was trying to hold her head in. I was just shouting for him.”

The expectant couple were ready to head upstairs, and had made it to the elevator. But little did they know that their daughter had no plans of being born in an ordinary way. Just as the baby started to arrive, healthcare assistant Marta Szcepaniak ran to help Nichola. The new mom recalled, “We were running down the corridor and I was shouting ‘the head’s coming’ and I was holding her head. This woman came from nowhere and caught the baby and wrapped her in her coat. She just seemed to appear. She had heard me screaming and came off her break to help. The baby just shot out, but Marta was a hero, she was my guardian angel.”

Szcepaniak, 32, had noticed the couple about to board the elevator and realized what was going on, and leapt into action to help. She said, “I was on a night shift and just heading back to my ward when my colleague and I heard a woman scream and then scream again, we then saw another colleague appear with a woman in a wheelchair outside the lifts. I asked one of them to get some towels and another to get some help while I helped take Nichola’s pyjama bottoms down. From then I knew I’d have to deliver the baby as its head was on its way. It’s the first time I’ve ever delivered a baby and feel so blessed to have had the opportunity to help, the baby was then here and crying and I just made sure I kept her warm.”

Szcepaniak is extremely grateful to have had the experience of bringing a new life into the world, saying, “It left me with a really good feeling and I was there in maternity until the cord was cut and it was confirmed that both mother and baby were okay. I then went back to my shift. I’ve had massive pats on the back from colleagues, friends and family and I just feel so proud as a mum, a woman and as a member of nursing staff at Southend Hospital. Everyday before and after my shift I would go and see them while they were in the hospital and even got to hold the baby girl again. I was really only doing my job.”