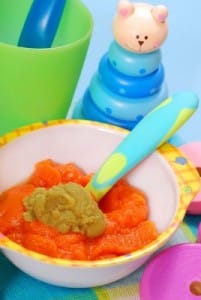 Up to an estimated eight percent of children suffer from some sort of food allergy, but how and why these allergies develop remains a mystery. A recent study that looked at the diets and food allergy development of 1,140 babies may hold at least one piece of the puzzle.

“We have been aware that certain diets seem to reduce the risk of allergy in infants,” Dr. Magnus Wickman, a professor at the Karolinska Institute in Stockholm, Sweden, who was not involved in the study, told Fox News. “The mechanism behind that is that we think that different kinds of fatty acids and antioxidants, different kinds of vitamins and essential minerals are good for your health and also prevent allergy.”

Kate Grimshaw, lead author on the new study and researcher at the University of Southampton in the UK seems to agree, and she says that her study stemmed partly from a concern that parents are reducing the nutritional diversity of their infants’ diets by avoiding certain “allergenic foods.” What’s more, she says there’s very little evidence to back up this common recommendation from pediatricians.

However, there is very little risk to recommending that parents focus on providing fresh fruits and vegetables for their children instead of processed, adult foods – a recommendation that is also given frequently by physicians. But there may be some serious benefits.

Those that did not have food allergies scored higher in diets that were rich in healthy, often homemade foods like fruits, vegetables, fish and poultry. But they scored very low in processed foods, meaning they ate very few foods like pre-made meals, pre-cooked sauces, bacon, snack cakes and potato chips.

“The analysis showed that the infants who were having more fruits and vegetables and less commercially produced baby foods and also less adult foods were the ones who were less likely to develop an allergy by the time they were two,” Grimshaw said. “It’s not that they didn’t have commercially-made baby foods. It’s just that they did not have them predominantly in their diet.”

And although the study couldn’t determine why the fresher diet seemed to protect against allergies, and the results couldn’t prove a direct cause and effect, the authors say that offering a diet higher in fresh fruits and vegetables certainly couldn’t hurt.

“We know that there are nutrients in the diet that educate the immune system,” Grimshaw said. “And one could argue that if they’re not there in adequate amounts when the child’s immune system is developing, that may be one way that this is working.”

Wickman doesn’t dispute the idea, but she did add that studies like these are very difficult because it’s hard for the researchers to account for the many various factors that could influence what a child eats and his risk factors for developing a food allergy. Still, she also says there is very little to back up the theory that avoiding allergenic foods provides any benefit to children, and healthy foods have numerous benefits. If they add a bit of immunity to allergies, well, that’s just another added benefit.

“Healthy food has so many good things,” she said. “And maybe it can also reduce the risk of food allergy in the child.”