It is no secret that pregnancy is a tough, but ultimately rewarding process. At the end of a 40 week-long process filled with bloating, hormone induced cry-fests, cravings and various increased bodily functions, we receive the greatest gift of all, a beautiful child who will bring nothing but joy and happiness to our lives as long as we live. But when it comes to being pregnant, there is one season that women loathe to carry in. Ask any pregnant woman and she will tell you that the summer is one of the most highly uncomfortable seasons to carry a baby in. 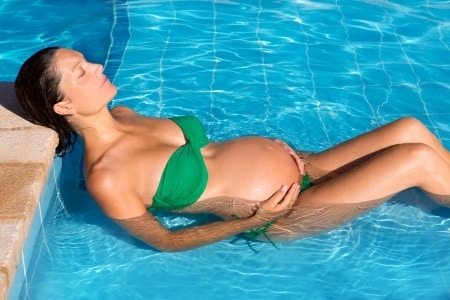 It seems that a new research study agrees. Researchers have found that heat waves can actually reduce the length of a woman’s pregnancy. Led by Nathalie Auger of the University of Montreal’s Department of Social and Preventative Medicine, the study took into account over 300,000 births that had occurred in the city of Montreal, between 1981 to 2010, along with the summer season’s temperatures being recorded by Environment Canada during the research process. Auger is an affiliate of CHUM Superhospital’s Research Centre as well.

The team of researchers set out to identify the probability of preterm ( > 37 weeks), early term (in between 37-38 weeks, and full term (39 weeks or more) births occurring during a heat wave, between the months of June through September. The study was specifically targeted towards summer births. Auger and the research team had found that approximately 20,000 births happened in the week following a day when the mercury in the thermometer reached 32 degrees Celsius or more.

The researchers performing the study did adjust for certain variables that included the humidity during the heatwaves, age of the women who were pregnant, and birth order. Auger and her team found that the heat did not necessarily increase the rate of preterm births, saying,

“We observed only a negligible increase in the rate of preterm births between days when the temperature was below 20 degrees Celsius and those when it was above 28 degrees Celsius, from 5.4% to 5.8%.”

The study however did find that women who had reached either 37 or 38 weeks of pregnancy, early-term delivery risk had increased by 17% after three days of 32 degrees Celsius or greater, as compared to days without a heat wave. When a heat wave had lasted anywhere from four to seven days, the risk of early-term delivery had shot up to 27%.

It is a well documented fact that the elderly are often adverse to extreme heat, the effects of which have been studied well. But according to Auger, there is little to no research that has been done observing the impact of heat on pregnant women.

“Small-scale studies suggest that heat-induced stress increases uterine contractility, during a period of pregnancy when thermoregulation seems less effective. We also suspect that dehydration resulting from high ambient temperature reduces the blood supply to the uterus, increasing the release of pituitary hormones that induce labour.”

Researchers also believe that these higher risks of early term births due to high temperatures could result in a higher morbidity rate among infants, noting,