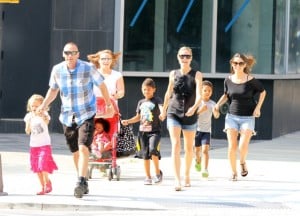 Mom, model, and designer Heidi Klum announced today that she will be teaming up with Babies R Us to create a new children’s collection, Truly Scrumptious, which will launch this September.

A natural step for the mom of four, the new line will feature more than just fashion.

It will, however, has some fashionable elements to it.

“I tackle everything from shoes, socks, underwear and pyjamas to dresses, jeans, leggings and sweaters,” she said.

As a mom of two boys and two girls, she says,

“I know a lot about dinosaurs. I’ve tried to come up with really cute magical things, like dinosaur footprints.” Also, a blanket printed with monkeys, snakes, and underwater scenes, which is “much better than just laying on a pink blanket,” she says. “I think it’s something that stimulates brain development.”

We look forward to seeing the whole collection when it is launched later this year!