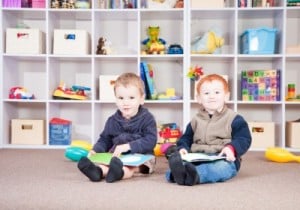 If you have even one boy, you know that they can be rambunctious and ornery, to say the least. They get into everything, including trouble. This isn’t the case with all boys, and for some, the lack of these behaviors may have something to do with their friendships in kindergarten.

This theory is based on a recent study written by lead author Jennifer Engle and co-authored by Nancy McElwain, a University of Illinois associate professor of human development . Published in a recent issue of the journal Infant and Child Development, authors used the study to determine how the presence and quality of friendships in kindergarten impacted their behavior and social skills in the first and third grades.

Data was gathered on 567 grade school children for the Eunice Kennedy Shriver National Institute of Child Health & Human Development Study of Early Child Care and Youth Development. Mothers were asked to report whether or not their child had at least one friend in kindergarten, and if so, what the quality of that friendship was.

“As we expected, high-quality friendships that featured cooperation and sharing, taking turns, low levels of hostility, and little destructive conflict, gave children – especially boys – practice in positive interaction, which they demonstrated in grades 1 and 3,” Engle said.

“Overall, teachers reported that girls in the first and third grade had good social skills, regardless of the quality of their kindergarten friendships. Boys, on the other hand clearly benefited from the good start that high-quality friendships provided,” said Engle. “Boys who had no friends in kindergarten had more behavior problems, but not until they had reached the first and third grades.”

So what do you do if your child doesn’t have a kindergarten friend? The first step, according to McElwain, is to teach your child how to be a good friend by displaying positive expectations, caring and respect in your home and towards your child. This type of modeling teaches your child how to respond to others in a positive way and it can also help them deal with conflict, a natural part of life. “Conflict isn’t necessarily good or bad; it’s a matter of how kids approach disagreements with their friends or parents,” says McElwain.

McElwain also says that parents can set up play dates for their children or attend social events that other children will be attending. This can help encourage friendships in young children. But even if all this doesn’t work, McElwain says not to fret. According to her, “Almost all of those children [in the study] had made a friend by the time they reached third grade.”