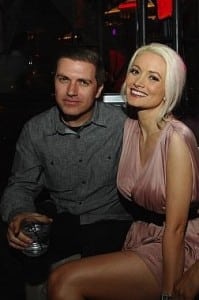 A lifestyle change is likely in the works for Holly Madison after she revealed she is expecting her first child with boyfriend of nine months, promoter Pasquale Rotella, 38.

The former Girls Next Door star and Playboy Playmate shared the exciting news with Us Weekly saying,

“I’ve always wanted to be a mom. But I thought it would take longer!”

Now 12 weeks along, Holly is feeling good in her pregnancy.

“I’ve been lucky! No morning sickness, but I do get a little nauseous. It happens before my show(Vegas burlesque revue, Peepshow), so I keep ginger ale backstage.”

Her website states that her last ‘Peepshow’ will be on December 30th, which will put her close to 30 weeks. At that point they will more than likely have to re-name it the Bumpshow!  I guess we’ll have to see…