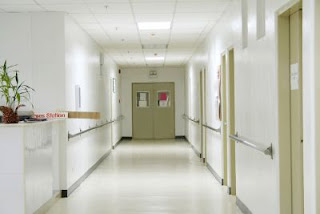 A U.K. mom has received an apology from the National Health Service in Scotland after she was left unattended for hours and had to give birth on a hospital floor despite her desperate appeal for a bed.

Health board officials have apologized to Lynne Neilson, 36, whose baby started to arrive as she stood, still clothed, in an assessment room at Edinburgh Royal Infirmary, a major teaching hospital in Scotland, after hours of waiting to be admitted. As the baby’s head appeared, a midwife ran in just in time to put a paper mat on the floor and catch the baby, who had the umbilical cord around her neck.

Lynne and husband Gavin, arrived at the hospital on the morning of Dec. 5, but went home when the labor pains slowed. They returned at 7 p.m. and were told to sit in the waiting room. As the contractions began to occur closer together, Gavin asked repeatedly for help until his wife, in pain and barely able to walk, was finally moved to an assessment room and examined by a midwife.

“She took control and put down a disposable mat on the floor,” the new mom said, referring to the midwife. “She caught the baby –- I was standing up and she was born on to the floor. I was very relieved that the midwife had come, because we were panicking.”

Baby Orla was born about two-and-a-half hours after the Neilson’s arrived at the hospital.