This must be the month for impatient snow babies! Yet another couple has delivered their baby before they could reach the hospital. This one, named baby Grace, was delivered Tuesday alongside an icy Atlanta highway. 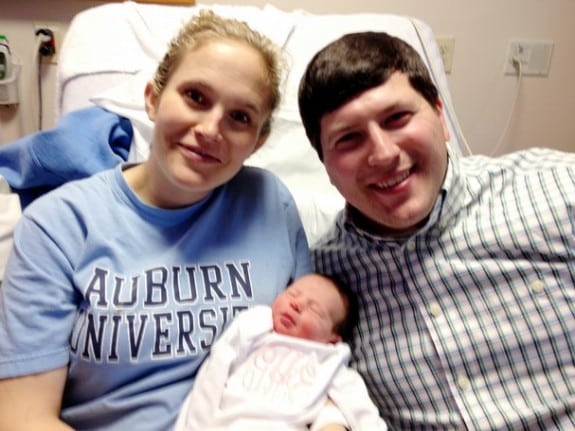 Just one week short of her due date, Amy Anderson started having contractions while at home Tuesday afternoon. She called her husband, Nick Anderson, to let him know. Unfortunately, it took a total of two hours for Nick to get home to her and their other two daughters, 2 and 4. That driving delay may very well have led to the roadside delivery that would soon unfold.

After piling everyone into the car, Nick hopped on the southbound Interstate 285. He’d heard traffic wasn’t that bad in that direction, and for the first few miles, it seemed as if they just might make it to the hospital. But then Amy turned to him and said those words he’d hoped wouldn’t come.

““I was like, ‘Man, we’re gonna make it,’” Anderson, who drove on the shoulder with his hazard lights on, honking to pass other cars, told TODAY. “Finally my wife just looked at me and said, ‘we’re not gonna make it.”

Taking into consideration that their two children were in the backseat of the car, Nick pulled over as calmly as possible and dialed 911. On the other end of the line, an operator walked him through the delivery.

“It was wild,” Nick said. “I realized that if I’m freaking out, it’s only going to make it worse for them.”

Nick didn’t have to go it alone for long. An officer stopped after noticing Nick standing outside their car’s passenger door. He asked if they were having car trouble, to which Nick responded, “No sir, we’re having a baby.”

Two minutes after their daughter made her entrance into the world, paramedics arrive and transported Amy and Grace to the hospital. Both are reportedly healthy and well. But both parents are still kind of taking in the exciting and unforgettable birth of their third daughter.

“We’re just kind of waiting to wake up and look at each other like, ‘Did that just really happen?’” Nick said. “[But] we’re very happy.”