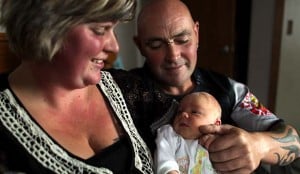 A couple in New Zealand had a harrowing experience delivering their new son Deago March 12th.  He didn’t arrive unexpectedly and he wasn’t delivered in the back of a taxi cab.  He was delivered in the maternity ward of Waikato Hospital…by his father, because despite repeated calls for help, no one was there to attend.

Rachael Shepherd, a former cyclist for New Zealand, was admitted to hospital the day before, as a result of high blood pressure.  While in labour, March 12th, Rachael was sent to shower as a way to relax and ease the intensity of her contractions.

Rachael has a history or quick deliveries, a predisposition the hospital had been made aware of.  So when, still in the shower, Rachael suddenly had the urge to push, one of the hospital’s midwives went to inform her original midwife.

“Rach told me again that she was dizzy and that she felt the need to push so I got her to sit on the toilet and pushed the buzzer but nobody came, she ended up pushing through the contraction and out came baby’s head.”

Dean desperately pushed the buzzer three more times and ‘sat’ on it to attract attention.

The baby was blue.

“Rach told me to check for the baby’s cord,” Dean said, “and it was under his jaw and around the back of his head so I freed it – then Rach pushed again and out he came.”

Shortly after birth, the baby let out a cry and hospital staff arrived, to care for him.

But, the delivery wasn’t over for Rachael, who was having complications delivering the placenta.  The umbilical cord had snapped and the placenta, “had to be surgically removed,” Dean said.

The ordeal with the afterbirth resulted in more pain than the labour had caused and, according to Dean, “added to the stress of the situation.”

Waikato Hospital is reviewing the case.

“After it all happened we were just pleased to have a healthy baby boy but after we thought about everything we realised things could have worked out quite differently.”

The Shepherds have been disappointed with their experience at the hospital.  They had gone into the delivery believing a hospital birth would be the safest option, given the likelihood of a speedy birth.  But, baby Deago’s arrival ended up being a bit of a DIY project, in the end. – Jen R, Staff Writer