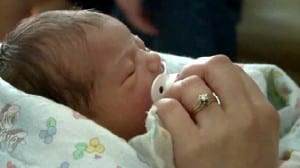 An expectant mom did make it in time to the hospital, but still could not manage to give birth to her daughter in the delivery room. That is because little Hannah was born just outside in the parking lot and with help from an unlikely member of the hospital staff – the valet!

Baby Hanna wasn’t due till next week but her mom Teresa Moyer started to feel contractions at work.

“I was feeling a few little contractions throughout the day and had not really looked at the clock to try and figure out how far apart,” she said.

Teresa left for work and met her husband Jason. The two of them raced to the Columbus Regional Hospital.

“As I am driving, shifting, talking on the phone to the hospital, and not run anybody over,” said Jason.

“Getting around cars trying to get me there as quickly as he could, telling me not to push, even though I was feeling the urge to push,” said Teresa. 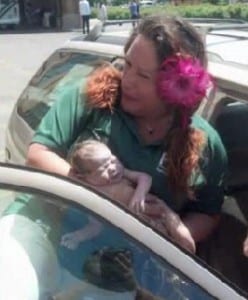 The two reached the hospital but were a bit too late. The baby was already coming out, and the only person around to help was hospital valet Venissa Altman.

“Baby’s shoulders, head, it is all coming out and I am kind of catching it like a football,” said the valet who never thought that delivering a baby would also be part of the job someday.

As Teresa pushed, Baby Hannah came out and landed right in Venissa’s arms.

“No, no, no. This was not a typical situation,” said the valet.

But then she knew she was in the right place at the right time.

“I looked down at baby and she cries and I knew everything was going to be alright,” said Venissa.

Lydia who is 5, is just glad to finally have a sister.

“She is so cute, cuter than Micah,” said Lydia.

Hannah is the first, however, to make an early arrival.

“The only one that wasn’t induced took over 12 hours, so I figured I would have plenty of time,” said Teresa. “Obviously she had other plans.”

Vanesa is glad she could help but hopes this is the only time she has had to deliver a baby.

“Uh, not anytime soon,” she said. “I think this memory will last a lifetime, so it does not have to happen anytime soon. I would be okay with that.”

The Moyer family is planning on baby number eight, but hopefully they will have a little more time to spare during this future delivery. 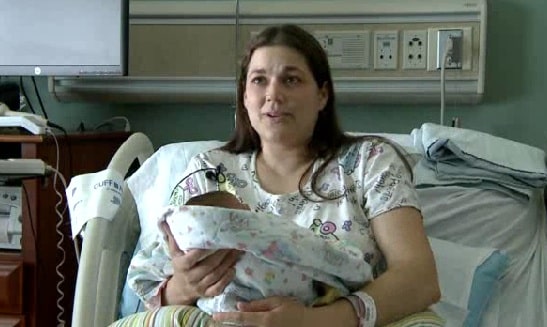