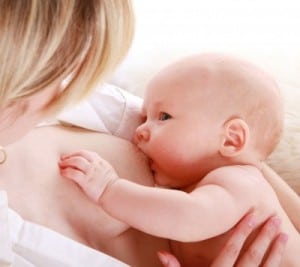 Currently, the recommendation regarding breastfeeding includes nursing exclusively for the first six months of life and continuing until twelve months while introducing solids. These recommendations come from many health organizations: the CDC, the World Health Organization and the American Academy of Pediatrics, just to name a few. Many health benefits can be received by both mother and baby by following these recommendations. Unfortunately, only a small fraction of women are able to meet these guidelines.

There once was a time when breastfeeding was the accepted and most prominent form of nutrition for infants. It is definitely the cheapest option, and once the learning curve is dealt with, it is generally much easier to implement than formula feeding. So why are women struggling with meeting these guidelines? Part of it may have something to do with hospital practices shortly after delivery.

It seems that many women set out with breastfeeding goals: 85 percent planned to breastfeed for three months or longer according to a study recently completed by the CDC. Yet only a fraction of those women actually meet the goals they have set for themselves: 32.4 percent. Researchers reached these numbers through surveys that started during pregnancy and ended when their babies reached a year old.

While breastfeeding is, ultimately, a personal and intimate choice, researchers from the CDC have laid a portion of the inability to meet breastfeeding goals to the lack of “breastfeeding friendliness” among some hospitals.

“We do know the hospitals have an important role to play,” said Cria Perrine, a CDC epidemiologist and lead author of the study. “It’s certainly a short period of time, but it’s a very crucial period of time.”

“It’s alarming that 40 percent of healthy babies whose mothers wanted to exclusively breastfeed were, nevertheless, given formula in the hospital, and it underscores the low quality of care that’s provided in maternity hospitals in the U.S.,” said Dr. Alison Stuebe, an OB-GYN and assistant professor of maternal and child health at the University of North Carolina who did not participate in the study.

More pressure has been placed on hospitals to cease the common practice of handing out formula samples to new mothers. Of course, this is being met with argument by formula companies, despite the ever-growing research that indicates that formula samples given in the hospitals are counterproductive to long-term breastfeeding success.

I’d also be interested in seeing a study that focused more on breastfeeding support after leaving the hospital. I’m pretty sure I’ve discussed this issue before; support was both confusing and limited after the birth of all five of my children. Thankfully, my first was a natural at it and I had a great deal of support outside of the hospital. Where I was living at the time, I had access to a lactation consultant five days a week, eight hours a day. Of course, that much support wasn’t really needed, but it was nice having someone there to talk to when I had questions or concerns. We made it a little more than eight months.

When my second child was born, I had no one to turn to or talk to about the struggles of trying to breastfeed a cleft baby. We were never able to nurse, but I was able to pump for about two months. With my third, I struggled with keeping breastfeeding a daily part of our lives after returning to work just two weeks postpartum. We only made it to five months. Again, with my daughter, no lactation consultants were available and I fought to hold on for as long as I did – four months. My youngest, like my oldest, was a natural nurser, but there were still some issues. Thankfully, I had a very strong breastfeeding advocate nearby and I found the help I needed, despite the fact that there weren’t any lactation consultants within a two hour radius. He was and is my longest nurser – he is nearly three and still going strong.

I believe very strongly in supporting women on their breastfeeding journey, however long or short it may be. That does start in the hospital, but it shouldn’t ever end. That support needs to come from advocates, friends and family members.  Yet women are often left to their own devices after leaving the hospital, and when you’re exhausted and struggling to get the baby latched on or are having severe nipple pain just days after leaving the hospital and you have no one to turn to, it’s so easy to look at that formula sample bag as a life saver.

I’m not saying that breastfeeding is right for everyone, but I am saying that when women want to breastfeed, they need more support when issues arise. But most importantly, they need road blocks, like sample formula packets, removed from their homes. This takes away the feeling of a “solution” and pushes the overly exhausted and possibly frustrated mother to breathe, try again and search for support, even if the only support to be had is online.