UPDATE:  The baby’s mom has been identified as a 16-year-old resident, who admitted putting the baby in the dumpster.  While few details are available police said she attended South Houston High School, and was taken to Memorial Hermann Hospital in Pearland where she was released after being checked over.  Child Protective Services will take custody of the baby.

ORIGINAL POST:  There was shock in a Houston, Texas neighbourhood this morning when a maintenance man discovered an abandoned newborn baby in a garbage container behind an apartment complex. 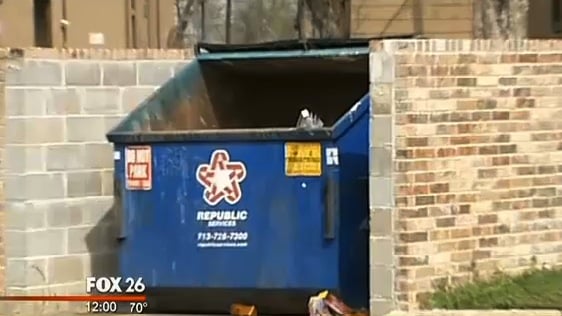 Contractor Carlos Michel was putting trash in a garbage bin at around 8:30 am this morning when he heard a noise that sounded like a cat coming from the industrial container.  After digging through the rubble he found a baby boy inside a plastic bag with discarded containers and food, with 4 inches of his umbilical cord still attached.  The infant was cold and barely breathing. 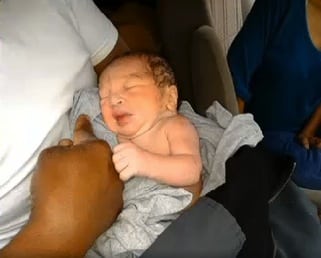 Carlos told the Chron.com he and another man took the child to a heated car and called 911.

Shaken by the event, Carlos, who is a grandfather himself to a two month old little boy, said “It made a big impact.”

“It was a shock to find a human being inside a trash bag,” he told the news crews. “An indefensible baby.”

To warm the baby up he wrapped him in his grey shirt and kept him close.  The baby just made wimpering sounds and didn’t open his eyes once.

At some points, it appeared the newborn was falling asleep. Scared, Carlos poked him to keep him conscious while they waited for paramedics to arrive.

When emergency crews arrived the baby was taken to Memorial Hermann Hospital where staff said he appeared to be well.

Many residents of the building expressed shock at the finding.   What makes it even more disappointing is Texas’ “Baby Moses” law allows parents to leave infants up to 60 days old at a hospital, fire station or ambulance station without fear of prosecution.  The new parents could have easily taken the baby to a neighboring town or city and dropped him off without fear of being identified by their community.

Officers are reportedly interviewing a 16-year-old girl at the complex after neighbors suggested she may be the mother.