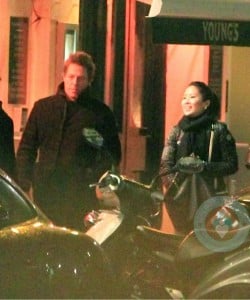 Surprise! Hugh Grant is a dad. A source close to 51-year-old British actor revealed the new today that he became a dad for the first time, welcoming a baby girl at the end of September.

The baby’s mom is said to be Tinglan Hong, 32. In January the pair were spotted outside a restaurant in the actor’s neighborhood(pictured, right) and they also played golf together a few times.

The source close to Hugh said,

“Both Hugh and Ting are thrilled and utterly besotted with their little girl.

“The child may not have been planned but that’s not to say Hugh won’t be a fully supportive dad, he will be.

“As well as regular visits, Hugh has readily agreed to secure the child’s ­financial security. His friends and family have known for some time, and Hugh has been wetting the baby’s head in his local gastropub, so for them this won’t come as any shock.

“Fatherhood may have come late in life but Hugh is over the moon. Everyone is delighted.”

Congratulations to the pair. We can’t wait to meet your new addition!